Holy smoke! Where have cigarettes gone? 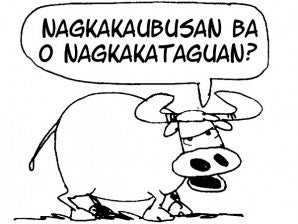 DAVAO CITY—Still dying for a smoke?

Either you kick the habit now or you chew gum for a week. Hopefully by then, your favorite stick will be back in the market—except that it will cost you more.

Cigarette smokers were finding it hard to find their favorite brands here and in other parts of Southern Mindanao Thursday because most wholesalers and retailers claimed they had run out of supply.

Major cigarette brands started to disappear from stores here shortly after Christmas—days before the sin tax law came into effect.

The department manager of a major mall and grocery store here, with branches in other parts of Mindanao and the Visayas, said they had run out of stock and that their sources had indicated their supplies would not be available until next week.

“All our branches in Mindanao and [the] Visayas have no stocks now,” said the manager, who declined to give her name for lack of authority to speak on the matter.

Pity the drinkers, too

It isn’t only cigarettes that have disappeared from their inventory but alcoholic drinks as well, such as Emperador Light and Tanduay Rhum, she said.

“By next week, the supply could return to normal but the prices would be higher than usual,” the manager said.

She said the price increase was caused by the implementation of the sin tax law, which took effect on New Year’s Day.

In another mall, which used to sell Marlboro Red 20s at P308 per ream of 10 packs before Christmas, stocks started to appear on Thursday.

Well and good—except that each ream now sells at P400.40.

A cashier told the Philippine Daily Inquirer the stocks were new but were being sold at a higher price based on the manufacturer’s suggested retail price.

The new price didn’t seem to bother one smoker much.

Renier, 40, who has been smoking for more than 20 years, said his brand, Fortune, was now being sold at the neighborhood store for P1.65 per stick or P33 per pack—up P18 from last month’s P15 per pack.

“I still buy. I can’t stand not smoking, especially after eating,” Renier, a government worker, said with a grin.

David Selma, a barber, said he had been trying to shift to cheaper brands since his choice, Philip Morris, became expensive.

From last year’s P40 per pack at a store near his shop, Selma’s Philip Morris now sells at P55 per pack.

Selma has tried a mentholated brand, which costs P30 per pack. “But I still could not adjust,” he said.

Francis Balong, another smoker, said he was surprised to find out on Christmas Day that his brand had disappeared from the shelves of his  favorite grocery store.

“I bought one pack in the morning and returned before sunset to buy another pack, only to find they had no more stock, including other brands,” Balong said. “That was unbelievable because when I bought one in the morning, they still had a lot of cigarettes on display.”

He suspected the store had stopped displaying the cigarettes in anticipation of a price increase.

Internal Revenue chief Kim Henares said during a radio interview on Jan. 1 that the disappearance of cigarettes and alcoholic drinks from store shelves could be blamed on hoarding by some retailers.

“Actually, they took advantage. Some people purchased and stockpiled, projecting that there would be an increase in prices on Jan. 1,” she said.

Henares said in another interview that the sin tax law did not cover prior stocks. “Only new stocks delivered by manufacturers,” she said.

But while retailers were trying to make a killing by padding up the prices of stocks which they bought at cheaper prices last month, Henares admitted that the government could not run after them.

“Cigarettes and alcohol are not considered basic commodities so there is no price control for such products. Nobody can be held liable for hoarding as far as these items are concerned,” she said.

Henares said the only thing the government could do would be to tax these based on their declared incomes from selling these items.