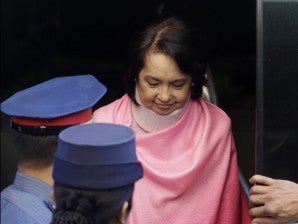 MANILA, Philippines—Former President and now Pampanga Rep. Gloria Macapagal Arroyo took a swipe at the administration in her New Year message on Tuesday, saying its anti-corruption message was not backed by deeds and was belied by the abuse of power to go after political enemies.

Arroyo also noted that the supposed flagship public-private partnership program has failed to take off, and the foreign direct investments were too low to bring about the kind of economic progress that everyone could feel.

“These are the challenges that face our leadership, even as the rest of us hope that we may still reap the rewards of the momentum for advancement that has brought us so far ahead over the last decade,” she said.

Arroyo, who is currently detained at the Veterans Memorial Medical Center for plunder, relayed her message on her official Twitter account through her staff. The former President is also usually criticized by President Aquino in his speeches.

“We are concerned that the slogan of anti-corruption still remains to be validated by measurable progress, and continues to be mocked by the abuse of political power to favor those on the inside while persecuting those on the other side,” Arroyo said in her message.

The President’s Liberal Party has been accused of going after governors who are members of other political parties, such as Cebu Gov. Gwen Garcia of the United Nationalist Alliance, and Pangasinan Gov. Amado Espino of the Nationalist People’s Coalition.

Garcia is defying Malacañang’s six-month suspension order for an administrative case, while Espino is now being investigated by the administration for alleged links to the illegal numbers game jueteng. Allies of the two officials have contended that these actions were political harassment from the ruling party. The President’s Liberal Party has denied the allegations.

According to Arroyo, who was Aquino’s economics professor in college, the administration has yet to build on the economic gains she achieved during her term.

She said the public-private partnership program, which the administration has long been heralding, “remains to be realized by the actual start, let alone completion, of new projects that will improve upon the substantial infrastructure we have already built.”

“The fiscal stability and macroeconomic resilience that was first achieved on my watch still remains to be translated into more foreign direct investments that will ultimately deliver the inclusive growth that the business sector and the impoverished three million unemployed Filipinos are still waiting for,” she added.

She said that in order for people to benefit from economic improvement, contracts must be respected and there must be a practical understanding of how free markets operate.

Also needed would be a “willingness to adhere to genuine economic data and not just propaganda,” she added.

The former President, who has also been facing graft and electoral sabotage charges, also wished for substantive justice.

“Most of all, we pray that true justice be administered to all without bias and prejudice,” she said.

Meanwhile, Anakpawis Rep. Rafael Mariano has a bleak outlook for Filipinos for 2013 under President Aquino’s leadership.

Mariano said higher taxes and the continued increase of oil prices would bring more burdens for Filipinos this year.

He noted that petroleum prices rose again on New Year’s eve, while higher water rates would be implemented starting Jan. 1. The sin tax law, which would bring higher prices for cigarette and alcohol products, also took effect on Tuesday.

“Overall, we see very little or no hope at all that the people’s economic and social conditions will change,” he said in a statement.

According to Mariano, 2012 was no banner year for workers’ welfare either.

“There were no significant economic reforms in 2012. Workers’ wages are still depressed, unemployment and underemployment have worsened, land reform remains a dominant social problem, the majority of the people have not felt the so-called improvement of the economy as claimed by the government,” he said.

As for the surprising, higher-than-expected 7.1 percent GDP growth last year, he said it was a “jobless growth.”