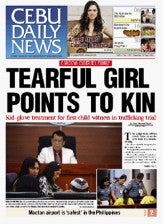 The judge took off his black robe to make him look less intimidating.

He chose a female interpreter for the young witness.

News reporters were asked to step outside the court room.

This was the setting of yesterday’s resumption of trial of the Cordova cybersex case, where a 13-year-old girl was the second witness of the prosecution.

“We wanted to minimize her trauma,” said Prosecutor Lolita Lomanta who presented one of five children who were rescued in a June 1 raid at home in Cordova town, where they were made to pose naked or act out lewd gestures in front of a web camera.

“I deemed it prudent to exclude from the courtroom all persons who are not a party in interest in the case if only to protect the minor.”

The girl wore a hooded cotton jacket to partly cover her features.

In court, for the first time since the raid, she faced the husband and wife, who allegedly directed the live sex show in their home.

At one point, the young witness was asked to identify the two accused.

She pointed to the couple seated on a bench, dressed in yellow prison T-shirts and wearing handcuffs.

“It was a very emotional moment. You can imagine the burden of pointing at a relative. She broke down,” Lomanta said in an interview later.

“We all cried as well when the child faced her aunt and uncle for the first time,” recounted Vice Gov. Agnes Magpale. She said the three social workers who accompanied the child and the court stenographer were also affected.

But Magpale said the child was able to answer questions clearly about what happened on June 1, when agents of the National Bureau of Investigation (NBI) raided the house.

Republic Act 9208 or the Anti-Trafficking in Persons Act of 2003 recognizes the right to privacy of both the trafficked person and the accused. For this purpose, the court or law enforcers may order a closed-door investigation, prosecution or trial.

“The name and personal circumstances of the trafficked person or of the accused” shall not be made public.

The arrest of the husband and wife as alleged operators of a home-based online pornography ring using their own children has horrified Cebu province officials and law enforcers, and put to test their ability to deal with the vulnerability of young victims who have to testify against family members.

The married couple is being held on a nonbailable charge of “qualified trafficking,” which carries a stiffer penalty because it involves minors.

The parents were represented by Paulito Cabrera of the Public Attroney’s Office (PAO).

The vice governor, who co-chairs the Provincial Women’s Commission, earlier testified about the CD given to her by an informant that showed video images of the children performing lewd actions with an adult woman.

Magpale said she attended the hearing yesterday to make sure the 13-year-old witness was well protected.

“My instruction to the social workers was to embrace the child, especially when she started crying,” she said.

Prosecutor Lomanta said they had to arrange the physical setup of the courtroom to put the child at ease.

Instead of taking the witness stand beside the judge, the girl was allowed to sit on a swivel chair in front of the magistrate.

A female social worker sat beside her and held her hand.

The hearing was supposed to be held inside the chambers of Judge Toribio Quiwag of Regional Trial Court Branch 27 in Lapu-Lapu City but the room was too small for all the lawyers and PWC Technical Working Group.

Lomanta asked the court to limit the persons inside the courtroom invoking Section 6 on confidentiality of the Anti-Trafficking in Persons Act.

“It’s for the best interest of the minor and to ensure a fair and impartial proceeding,” Lomanta explained.

“If there are unfamiliar faces inside the courtroom, that may intimidate, embarrass and cause her fear.”

The girl’s testimony went on for about an hour. The contents will be kept confidential.

“She (the witness) was very candid and spontaneous in her answers.”

“We emphasized to her that she will just have to tell the truth,” said the prosecutor.

During her testimony, Lomanta said the witness affirmed what was stated earlier in her sworn affidavit.

To familiarize her with the court room, the teenager was brought there a day before the hearing just to get her bearings “so it would be less intimidating for her,” said Lomanta.

After she testified, she had a debriefing session with social workers.

Five children of the couple and the niece were rescued, after a month-long surveillance.

The parents face charges of child abuse and child pornography aside from the offense of “qualified trafficking,” where the penalty upon conviction is life imprisonment and a fine of P2 million to P5 million.

The next hearing is scheduled on Oct. 25.

“We are doing this not for anyone else, but for the children,” Lomanta said.

The special law’s confidentiality clause prohibits the identification of the victims and suspects in the media. With Jucell Marie Cuyos and Carmel Loise Matus