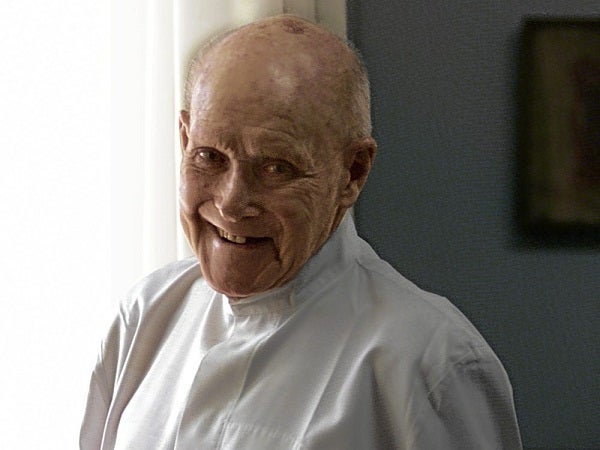 Fr. James Reuter, SJ, the revered and and well-loved American priest and honorary Filipino, passed away Monday from lung and heart failure, the Ateneo de Manila University community has announced.

Reuter, academic, communicator, singer, athlete, artist and political activist, died at 12:51 p.m. Monday at the Our of Lady of Peace Hospital in Parañaque City, his home for the past three years, said Sister Eva Maamo, a nun who was closely involved in the priest’s mission work in the Philippines.

“He had been unconscious in the last four days. We gave him IV (intravenous fluid), oxygen, we gave him everything that can help but his heart and lungs gave,” she said in an interview.

Maamo is the president of the Foundation of the Our Lady of Peace Mission Inc. (Folpmi), an organization that supports urban poor and indigenous communities around the Philippines whose board Reuter chaired.

The nun said Reuter had been under the care of private nurses at the hospital. Already wheelchair-bound, he had moved from the Jesuit residence in Manila to the Parañaque hospital in 2009 because of his frail health.

“He was still able to speak until four days ago when he fell unconscious. Nurses were on duty every day to take care of him,” Maamo said.

Interment plans are expected to be finalized after the holidays but Nebres said Reuter will definitely be interred in the Jesuit cemetery at the Sacred Heart Novitiate in Novaliches, Quezon City, Nebres said.

Reuter’s relatives in the US have also been informed about the priest’s passing.

“The University mourns the passing of Fr. James B. Reuter, SJ, who joined our Creator at 12:51 p.m. Tuesday, at the age of 96,” the Ateneo de Manila University said on its Twitter account.

Reuter was born in New Jersey on May 21, 1916, When he was just 7 years old, he made a decision that would set the course of his life.

“I was in second grade and heard the nuns talking about the missions. This struck me as attractive so I said I would be a missionary,” he said.

At 18, he entered the Society of Jesus, and just four years later, he was sent as a Jesuit scholastic to study philosophy in the Philippines.

Reuter arrived in the Philippines in 1938 and immediately fell in love with the Philippines and the Filipinos, a nation he credits for teaching him the true meaning of faith.

“When I first came here, I thought I was bringing God to the Philippines. But what I discovered was [the Filipinos] brought God to me,” an already frail Reuter said between sobs during an intimate gathering of friends and former students at the Our Lady of Peace Hospital to celebrate his 94th birthday in 2010.

Chiefly known as a prominent communicator of the Church, he used the different media—radio, television and print—to spread the Gospel for almost 50 years.

He taught at the Ateneo de Manila University and pioneered Jesuit broadcast communication in the country through the Family Rosary Crusade.

As head of the Church’s National Office of Mass Media, he may well have been one of the few clergymen in the country who really understand media culture. He coordinated the conduct of all Catholic radio stations including TV programs.

His mark on PH history

Reuter’s most lasting contribution to Philippine history was the setting up of  “Radyo Bandido,” the underground radio station that bolstered people’s spirits and kept the country and the world informed about the 1986 People Power Revolution.

During the first Edsa People Power Revolution, when the transition facilities of the Church-owned Radio Veritas were destroyed by Marcos troops, Jaime Cardinal Sin, the Archbishop of Manila, called Reuter about finding a replacement.

DZRJ radio, then controlled by the anti-Marcos opposition forces, moved its frequency from 810 to 840, and thus was born “Radyo Bandido,” with June Keithley-Castro becoming the eyes and ears of the nation during the four-day uprising.

In 1989, Reuter received the Ramon Magsaysay Award for Journalism, Literature and Creative Communication Arts in 1989 for “employing his gifts as writer, theatrical director and broadcaster, and most of all as teacher, to make the performing arts and mass media a vital force for good in the Philippines.”

In 2009, the Catholic Church gave Reuter the Serviam Award for his hard work and passion as a priest and as head of the Catholic Bishops’ Conference of the Philippines’ media commission. He was cited for what he accomplished for the Church, communities, schools and young people in the Philippines and across Asia using broadcasting, theater and his writings.

In 1996, Congress unanimously voted to make Reuter an honorary Filipino. In 2005, the Senate passed Senate Resolution No. 17, which hailed the Amercian Jesuit for his “extraordinary and unparalleled life of service to the Filipino people.”

In 2011, President Aquino awarded Reuter the Philippine Legion of Honor with the rank of Chief Commander, the highest honor that the President of the Philippines may grant an individual without the concurrence of Congress. With Inquirer Research