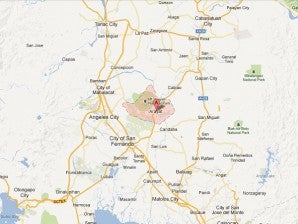 ARAYAT, Pampanga, Philippines—In the early 1970s, followers of Dr. Jose Rizal trooped by the thousands to the Rizal monument at Luneta Park in Manila where the Spanish colonial government executed him on Dec. 30, 1896.

Their founder, Epifania Valdejos Castillejos, believed to be the “babaeng Rizal” (female Rizal), draped herself with a large Philippine flag in the annual parades, said the 61-year-old Bacsa.

“Apo” was how Castillejos was called. Revered for the folk religion she led, visitors in her one-hectare shrine at the foot of the fabled Mt. Arayat here included former First Lady Imelda Marcos, the late Vice President Salvador Laurel and European diplomats, photographs showed.

But 62 years since the group’s founding, Bacsa said the number of members has dwindled to less than 300.

Bacsa said the declining membership could be due to the death of Castillejos on Dec. 7, 1991, at the age of 85. For another, the members have little money to pay for travel expenses.

Members are based in Pangasinan, the Ilocos provinces, Quezon, Palawan, Bicol and the Visayas provinces. Those from Pampanga and Bulacan often make it to the shrine and attend the group’s activities.

Around 15 people permanently stay at the compound, including Remedios Saballe who, at 30, found the shrine, served Castillejos and never left. She is now 66.

An old tamarind tree stands at the center of the compound, surrounded by several huts, the mess hall and kitchen. The circular chapel, adorned with Philippine flags, contains photographs of Castillejos, the “matandang Rizal” (old Rizal or Señor Ignacio Coronado) and two busts of the national hero. Keeping seven pianos and musical organs, the chapel was built next to the hut of Castillejos.

At the chapel is a painting of the Spanish maiden, Consuelo Ortega y Rey, for whom Rizal supposedly professed a “divine love.”

Of the current batch of followers, 20 percent are youth, between 18 and 31 years old, assuring the group of continuity, according to Bacsa.

The declining membership has not alarmed them because, Bacsa said, their belief has always been rooted in Rizal.

“Rizalismo,” according to Bacsa, is “differently distinct in many ways” from other religious beliefs because, based on documents with the Securities and Exchange Commission, it is “anchored on science, knowledge, freedom and public good.”

“We are not after quantity but quality. This is a matter of having little, not having many. We are waiting for the good seeds to sprout,” Bacsa said.

The group has stopped recruiting members after Castillejos stopped the missions that turned into “konsumisyon” or headaches.

“Those who organized missions preached about themselves, not Amang Hari (Rizal),” he said.

Bacsa could not say how big the group has grown. “One time I asked Apo how many Rizalistas there were in the country. She said one was a Rizalista if they followed the 10 Commandments,” he said.

Back in the 1980s, Bacsa remembered that the shrine was always full. “You can’t drop a needle in the crowd. If you left your seat, there was no way you could go back to it,” he said.

The group’s openness to researchers helped spread knowledge about it and its beliefs. It maintains a library where members read the works of Rizal and literature on his life as an intellectual and freedom fighter.

Membership has not grown because it is not based on affinity. Family members do not automatically become Rizalistas. “They become one when they want to be,” Bacsa said.

But the younger family members are taught about Rizal when they reach the right age and their impressions of him are limited to what they learn in school, much about his being the author of Noli me Tangere and El Filibusterismo.

Bacsa disagreed with views on the fading of Rizalismo. “This was determined by God. It won’t die,” he said.

He said the public should “return to our heroes, relearn their doctrines and principles para sumulong tayo at magkaroon ng kapayapaan (to move forward and have peace).”

“Spain and Christianity kept us poor and enriched the Vatican, that is why the Philippines is still mired in poverty,” he said.

On the eve of Rizal’s death anniversary, seven men and seven women, garbed in white, some unshod, sang prayers to the man they call Amang Hari at the shrine.

At the mention of his name, they and harp player Rudy Umalla bow their heads as a sign of respect.