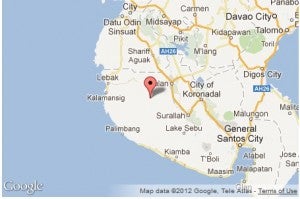 TACURONG CITY, Sultan Kudarat, Philippines – A suspected grenade thrower was killed Thursday night while another suspect was arrested during a follow up police operation shortly after a grenade exploded inside the residential compound here of the mayor of a nearby town.

Last October, unidentified men also lobbed a grenade at the mayor’s house but nobody was hurt, he said, adding that the police were eyeing politics behind the attacks but were unsure if these were perpetrated by the same group.

Buenacosa said the slain suspect remained unidentified as of Friday afternoon as his arrested companion, Nasser Abdullah, 40, of Kabacan, North Cotabato, was mum during interrogation by the police.

Buenacosa said the slain man and Abdullah rode in tandem on a motorbike and hurled a fragmentation grenade into the house of Salamanca, which is on Lapu-Lapu St. here around 7:45 p.m.

The grenade fell short of the house and instead landed on the yard, where it exploded but harmed no one, he said.

Buenacosa said Salamanca’s escorts, who were outside the mayor’s house, engaged the attackers in a running shootout. Two men inside the mayor’s compound during the shootout were also injured.

“We cannot confirm yet if they’re among the security officers of Salamanca until our ongoing investigation has concluded,” he said. Buenacosa also said the police had not ascertained yet if Salamanca was in his house during the grenade attack.

Buenacosa said a team from the city police office pursued the suspects and caught up with them near Fernandez Subdivision here.

It was at this moment that Abdulla tossed another grenade at the responding policemen as his companion kept on firing a handgun. The explosion injured a woman, who was walking nearby, he said.

During the shootout with pursuing policemen, Abdulla’s companion was killed while the second suspect, who yielded another hand grenade and a .45 caliber pistol, was arrested, Buenacosa said.

He said investigators were conducting deeper investigation into the second attempt at Salamanca’s life.