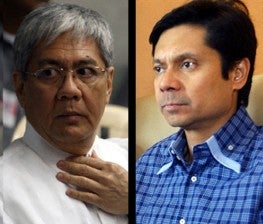 Based on the 134-page joint resolution, the Office of the Ombudsman, through its panel of investigators said “there exists probable cause” to pursue the criminal cases against the officials who are “probably guilty of the crimes charged.”

Charged with one count each of malversation and violation of the anti-graft law were Regional Executive Directors Gumersindo D. Lasam of Tuguegarao City; Cesar Rodriguez of San Fernando City; Ricardo Oblena of Cebu City, Leo Cañeda, Oscar Parawan, Roger Chio, Sumail Sekak and Eduardo Leccsiones Jr., Dennis Araullo of the DA Central Office who also faces a case for malversation, technical malversation and slapped with five counts of violation of the anti-graft law.

The Ombudsman also filed a similar case for technical malversation and violation of the anti-graft law against 19 other Department of Agriculture officers and several private individuals.

Ombudsman Merceditas Gutierrez, inhibited herself from the case. Gutierrez, a close ally of former president Gloria Macapagal-Arroyo, allegedly sat on the case, which is now included in the impeachment complaint filed against her in Congress.

The fertilizer fund, meant as an agricultural support for farmers, was allegedly used to bankroll the campaign of the Arroyo administration during the 2004 elections.