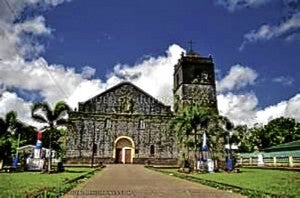 NAGA CITY—The 400-year-old church of Vinzons, Camarines Norte, was gutted by a fire that raged for over four hours yesterday.

Vinzons Mayor Agnes Ang said she and her town mates were grief-stricken by the loss of their parish church and a local historical landmark.

“People in the town proper woke up to see the centuries-old church in flames and many were crying. For us, the church is a refuge, a place to go to when problems come,” said Ang in a phone interview.

Faulty electrical wiring triggered the fire that broke out at about 1:30 a.m. and was extinguished at about 6 a.m., said the Bureau of Fire Protection (BFP) in Vinzons town, in a statement sent to the Inquirer through the Philippine National Police in Camarines Norte.

The fire started at the old convent and spread to the neighboring church edifice, the BFP said.

Strong wind fueled the fire, which razed all of the convent and Saint Peter the Apostle Church, the BFP added.

The PNP quoted Fr. Francisco Regala, parish priest, as saying that the fire damaged old artifacts and documents. The total damage was placed from P8 million to P10 million.

The burnt church was considered the oldest in Camarines Norte and one of the oldest in the Bicol region and the country. It was built during the 1600s by the Franciscans.

Gov. Edgardo Tallado, who rushed to the site of the fire, asked the fire marshal of Camarines Norte to explain the slow response, which resulted in the burning down of the entire church.

“The fire station of Vinzons is less than 100 meters from the church. I wonder why the fire was able to burn the church almost completely,” Tallado said in a phone interview on Wednesday.

Only the concrete walls of the church were left, he said.

Tallado said he received an initial report saying the fire truck of Vinzons Fire Station did not have water inside it when the fire broke out so that firemen came only 10 minutes into the fire.

A fact-finding team he organized on Wednesday would confirm the allegation, the governor said.

Fire trucks from neighboring fire stations in Daet and Labo, according to Tallado, also came only after 45 minutes. The governor also asked the fire marshal in the two municipalities to explain.

Both municipalities border Vinzons and both are about 15 minutes away from the fire site. 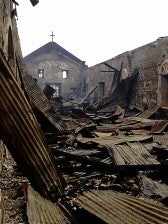 WHAT remains of the 400-year-old Saint Peter the Apostle Church in Vinzons town, Camarines Norte, after a four-hour fire

Tallado said he received reports that the fire stations in the two big towns were also undermanned when the fire started gobbling up the historical church.

Fire Insp. Salvador Arandia, fire marshal of Labo and acting head of the BFP in Camarines Norte, said in a phone interview that he was also asking the BFP in Vinzons why the response was slow.

Arandia said the fire truck of Vinzons was fresh out of repair and the biggest fire station outside of the town was that of the capital town of Daet, which was just 7 kilometers away.

Ang said the municipal government formed its own fact-finding committee to determine liabilities. She said a security team was also deployed in the church compound to deter looters.

Tallado said he would recommend the dismissal of any official found to have been negligent.

PHOTOS COURTESY OF THE LOCAL GOVERNMENT OF CAMARINES NORTE