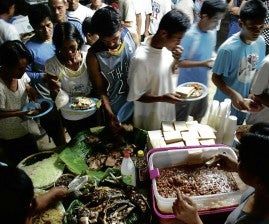 FARMERS’ ‘NOCHE BUENA’ Farmer-members of Task Force Mapalad share food during the “noche buena” at the DAR building where they staged a hunger strike. ARNOLD ALMACEN

The past 12 months saw Agrarian Reform Secretary Virgilio de los Reyes battling criticism and staving off calls for his resignation both from the farmers his department purportedly serves and the workers it employs.

But if you asked him, 2012 was a good year for the Department of Agrarian Reform (DAR).

“As we end the year, we can look back with satisfaction that in 2012, we did a good job,” he said in a Dec. 21 letter addressed to the “entire DAR community.”

“We did our work the best way we could, innovating with new processes and systems in land tenure improvement, program beneficiaries development, and agrarian justice delivery,” he said.

By turns defensive and hopeful, the letter sought to address several concerns aired by stakeholders about the slow pace of the distribution of land under the 24-year-old CARP begun by President Aquino’s late mother, Corazon Aquino.

Earlier this month, farmers belonging to the Negros Occidental-based peasant group Task Force Mapalad barged into De los Reyes’ office and staged a hunger strike in a bid to press Mr. Aquino to remove the official.

But after a meeting with Budget Secretary Florencio Abad and Social Welfare Secretary Corazon Soliman, on Mr. Aquino’s behest, the farmers agreed to put off their protest temporarily to give time to the government to meet some of their demands.

In his letter, De los Reyes said his critics apparently failed to appreciate what the department was doing to improve its performance.

He noted that based on partial November reports, memoranda of valuation (MOV) had been issued to 13,327 landholdings totaling 92,129 hectares. These landholdings are compensable by state-owned Land Bank of the Philippines (LBP).

“Part of these have matured into CLOAs (certificates of land ownership award), and part are still with the LRA (Land Registration Authority) for issuance of RP (real property) title or for CLOA registration,” he said. “Adding the non-LBP compensable lands, we are on our way to exceeding last year’s accomplishment,” he said.

De los Reyes said the issuance of the MOV was basically the last stage of the DAR’s mandate.

“Very few among the agrarian reform advocates, much less the general public, know that with the issuance of the MOV, the DAR’s work is essentially done,” he said.

“They may be unaware that by that stage, our field personnel would have finished the research and gathering of basic documents, issuance and service of Notices of Coverage (for landholdings covered under compulsory acquisition), pre-OCI (ocular inspection), beneficiary identification, conduct of survey and preparation of survey returns,” De los Reyes said.

“They claim that I have not been able to lead the DAR to accomplish more. They want me to ‘discipline’ personnel who are ‘slow.’ They have branded as excuses DAR’s explanation that what is left to distribute are landholdings that are harder and more tedious to process,” he said.

“They are unable to appreciate (or refuse to understand) the innovations we have put in place to accelerate the acquisition of LBP-compensable lands which make up the bulk of the LAD (land acquisition and distribution) balance,” De los Reyes said.

He also congratulated the DAR’s field personnel from provinces with few landholdings left to distribute for assisting their counterparts in short-staffed provinces where many landholdings remained to be processed.

“Central office personnel assisted DAR provincial office in Tarlac in processing the interview sheets of more than 8,000 applicants in Hacienda Luisita. They are assisting Negros Occidental in trace-back and trace-forward of more than 3,000 canceled titles of covered landholdings; in addition, they serve all NOCs (notices of coverage) for landholding whose owners reside in Metro Manila,” he said.

Responding to the resignation calls from DAR employees, De los Reyes said the DAR Employees Association and its allies in the Save Agrarian Reform Alliance had zeroed in on the “Transition Plan,” which they claimed to be a devious plot by the government to close down the DAR and prematurely end the agrarian reform program.

“In fact, the Transition Plan proposes the offer of a voluntary retirement package to those who want to retire early so that the positions freed would allow DAR to upgrade, promote and hire additional personnel in provinces where personnel are overworked,” he said.

De los Reyes ended his message on a hopeful note, citing the promise of Mr. Aquino that the land distribution aspect of the agrarian reform program should be completed by the end of his term.

“Farm workers in Hacienda Luisita will see the fruition of their decades-long struggle when we finally distribute the land around May 2013,” he said.

“The more than 90,000 hectares in the pipeline will mature in the first semester of 2013 and we will hopefully witness the DAR achieving record accomplishments in distributing lands covered under compulsory acquisition.”