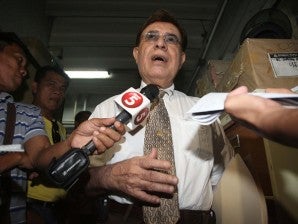 Former Philippine Charity Sweepstakes Office (PCSO) director Manuel L. Morato has a “valid reason to be sore, if not mad as hell” at Ombudsman Conchita Carpio-Morales, according to Ombudsman insiders.

Morales, they said, brushed aside a recommendation by a five-member Ombudsman panel of investigators to dismiss the P356-million plunder and malversation of public funds charges against Morato and his corespondents in the (PCSO) case, now pending the Sandiganbayan.

The same sources have furnished the Philippine Daily Inquirer a copy of the investigative panel’s 52-page resolution, dated March 2, in which the investigators said there was “no proof or basis for the charge of plunder against the respondents.”

The panel was cochaired by Deputy Special Prosecutor Cornelio Sumido and Mary Susan Guillermo. Joaquin Salazar, Roque Dator and Nellie Boguen-Golez were the members of the panel.

In their resolution, the investigators said “what was merely established in the record was that respondent Uriarte received the checks and the money representing the additional intelligence funds  as requested, approved by [Arroyo] and confirmed by the (PCSO) board of directors.”

“The encashment of the checks was evidenced by Uriarte’s signature in the dorsal portion of the checks. [But] the record is completely wanting of proof that the proceeds of the checks became the ill-gotten wealth of the respondents,” the investigators said.

For the money to be considered ill-gotten, the investigators said, “there must be evidence that the amount was already converted in some form that would establish ownership by the public officer, or his/her dummies, nominees, agents, subordinates or business associates and not by mere physical possession of the amount.”

In the absence of such evidence, the investigators recommended the dismissal of the charges against Morato and his corespondents.

But the investigators said the respondents “should be held liable for violation of Section 3(e) of Republic Act No. 3019, considering that the 2008-2009 General Appropriations Act did not allocate any confidential and intelligence funds for the PCSO.”

When reached for comment, Morato, who is being held in arrest at St. Luke’s Medical Center in Quezon City, declined to talk about the resolution.

He told the Inquirer earlier that he was “hurt and very sad” for being blamed for something he did not do or had anything to do with involving disbursement of intelligence funds at the PCSO.

But Morato sent his “best wishes to all Filipinos who have been spared political prosecution.”

During his arraignment earlier this month, Morato refused to enter a plea, prompting the court to enter a not guilty plea on his behalf.

Morato, who served as PCSO chair in the Ramos administration, had asked the Supreme Court to review the charges against him and to stop the proceedings in the Sandiganbayan.

The Sandiganbayan allowed Morato to be held in a hospital under the supervision of the National Bureau of Investigation (NBI) after he submitted a medical certificate showing that he underwent open heart surgery on Oct. 22.