He wanted land for farmers but got Muntinlupa instead 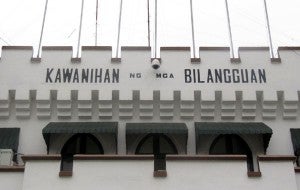 It hasn’t been easy for peasant leader Jaime Tadeo.

Tadeo remembers with a wry smile that he once asked then President Corazon Aquino for land for the farmers, but got himself instead a cell in the New Bilibid Prison in Muntinlupa City, which means tiny land in Filipino.

There, the man popularly known as Ka Jimmy, spent three years and three months on what he says were trumped-up charges of swindling in connection with a P200,000 rice inventory shortfall in a farmers’ cooperative he had taken over after its manager was shot dead during the martial law regime.

First brought against him by the Ferdinand Marcos dictatorship, the case was revived by the first Aquino administration after he led a peasant march in 1987 on the Palace to press his demands for the breakup of landed estates.

The protest turned violent. Thirteen farmers were killed,  gunned down by Marines, during the event now infamously called the “Mendiola Massacre.”

The following year, Corazon Aquino  enacted the Comprehensive Agrarian Reform Program (CARP). Implementation has been slow. The program was extended several times, the last for five years in 2009. It is now known as CARP extension with reforms, or Carper.

The years have mellowed Tadeo, who told the troops standing on his way at Mendiola  to “stand aside or blood will flow.” At the age of 74, he has assumed a Gandhian serenity as he talks about a life devoted to “liberating” farmers from feudal estates.

He remains as frustrated in his campaign today, under the second Aquino administration, as he was before.

“The President does not have a libido for agrarian reform,”  Tadeo said, echoing concerns by farmer groups and the Catholic Bishops’ Conference of the Philippines  that the Aquino administration has been “consistently underperforming” in implementing the program.

In 18 months, the program will end with nearly 1 million hectares still to be covered.

June 14 with peasants and bishops at the Palace, where he promised to implement  the land-to-the-tiller program before it expires in 2014.

“The backlog is so huge, it cannot be done. Will Congress agree to respect a notice of coverage that will take effect after the expiration of the program?” he asked.

Out to torpedo program

As Carper hits the homestretch, landowners are attempting to torpedo the program, said Tadeo, a farmer representative for northern Luzon in the Presidential Agrarian Reform Council (PARC).

“It’s not moving because the landlords are a step ahead of the implementors. They are giving bribes so that claim folders to their lands are not touched,” he said.

“Corruption has worsened,” he says, claiming that some Department of Agrarian Reform (DAR) personnel, particularly those in the field, are using the homestretch in the CARP program “to enrich themselves.”

“If the DAR people are landlord- and not peasant-oriented, the program will collapse,” Tadeo said in an interview in the PARC office at the DAR building in Quezon City, occasionally stroking his hair and beard, which have turned white, or his steel-rimmed glasses.

“Paralysis” has hit the DAR as Mr. Aquino prepares to dismantle the department in preparation for the expiration of the Carper law, he said.

“It’s now about self-preservation. People are now talking about retrenchments and retirements,” he said.

DAR workers fear antagonizing landowners. Harassment in court could deprive them of their retirement benefits.

That is why Dorita Vargas, 63, hasn’t yet gotten the title to the land she is claiming from the 127-hectare Hacienda Cantikbil Manalo in Negros Occidental, in spite of the personal promise she received from the President during a meeting in Malacañang six months ago.

Cantikbil Manalo has been “chopped up” into nine parcels to evade CARP. Because titles to all but one parcel of 10 ha exists for distribution to some 50 agrarian reform beneficiaries, Vargas will probably get a teeny-weeny bit of a joke, according to her pro-bono lawyers.

3 ha, according to her original reckoning.

Edna P. Sobrecaray, 42, echoes laments in the land redistribution process. She is a community organizer of Task Force Mapalad, a Church-backed rural development movement, who has worked with farmers seeking the subdivision of 37 sugar haciendas on Negros island.

She says meetings called by the DAR were often aborted for various reasons—the absence of key officials, lack of staff or funding, or incomplete documentation.

“When the owners identify the workers demanding land, these people are threatened, harassed and ultimately fired. CARP gave them hope, it became their Calvary. But the farmers persist. They know it will lead to their liberation from oppression,” she said.

Tadeo’s major concern is the threat of a “zero budget” for the program upon the expiration of the Carper law, one of five options being considered when the DAR’s activities are farmed out to other departments—justice, agriculture and  environment and natural resources.

“It should have been very appropriate that the program started by his mother would be completed by the son,” said Manila Auxiliary Bishop Broderick Pabillo.

“But he is not rising to the occasion. I don’t know if he is trying to protect the family, or probably there are strong forces within his administration opposed to the program. Many of them are landlords. There are also some deals done with the big families,” Pabillo said.

“It could be that he does not know the situation of the poor. He has always been with the rich, he’s always been landed. He doesn’t know how important this is.”

The President’s family owns Hacienda Luisita, which is now up for distribution to tillers on Supreme Court orders.

Evidence of the administration’s lack of enthusiasm for CARP is in the budget allocation.  This year, the DAR asked for a P30-billion allotment, called under the five-year Carper program with a mandated total budget of P150 billion. It got only P18 billion. An additional request for P4.9 billion for credits and technical support for farmer beneficiaries was rejected.

Budget Secretary Florencio Abad told Inquirer editors during a recent visit that the fund was channeled to the construction of farm-to-market roads, and to the administration’s flagship program, the conditional cash transfer (CCT) scheme to get mothers to go to clinics for medical treatment and children in schools.

The CCT budget was doubled this year to almost P40 billion. Critics say that while the program is needed by the impoverished, it is not a vehicle for social amelioration.

“Farming is a business. You need capital to make the land efficient and competitive,” said Tadeo, himself a rice farmer using organic fertilizers, his new advocacy.

“Our farmers have always been mired in debt,” he said. “That is why we have never attained self-sufficiency in rice. It hasn’t been planted yet, the grain is already gone.”

Rice farmers in his native Bulacan were the first beneficiaries of the Marcos land reform program, he recalled. They failed to become cultivators because they did not have the resources to plant rice on their own and feed themselves while waiting for the harvest.

“The farmers have been wiped out,” Tadeo said, noting the tragic results at Barangay Culianin in his Plaridel, Bulacan, home. “They have become nothing more than farm hands, working for 10 percent of the rice yields. That’s why I am very sad.”

A study conducted by the German technical cooperation agency GTZ says that agrarian reform over the past three decades has failed to increase agricultural productivity, reduce rural poverty and spur landlord investment in  industry development in the countryside.

The 272-page study says that the DAR has concentrated on land redistribution without support services to the beneficiaries who were later forced to mortgage their land, and eventually sell them because they could not cover the amortization.

Tadeo said Cory Aquino had the opportunity to fully implement agrarian reform after she was swept to power in the Edsa People Power Revolution of 1986 and subsequently declared a revolutionary government.

Land redistribution programs succeeded only under authoritarian regimes, Tadeo said, pointing to experiences in Japan, prostrate after World War II and under  an American shogun, and in South Korea and Taiwan.

That was why he led a march on Malacañang in January 1987, to press Cory Aquino to use her draconian powers to decree land redistribution. He feared the program would be emasculated in a landlord-dominated congress.

A scene out of Spoliarium

That day is etched in his memory.

“It was very quiet when we reached Mendiola,” Tadeo said. Arms linked with fellow marchers, he recalled approaching Col. Edgar dula Torre, head of the riot police contingent, on Mendiola Bridge to negotiate permission to hold a rally near the Palace gate.

“All of a sudden, gunfire erupted,” he said. He thought the firing came from the Marines.

“At first they were firing in the air. Then they started pointing their guns at the people. We hit the ground. I could see people falling on the ground. It was a scene out of Spoliarium,” Tadeo said, referring to Juan Luna’s prize-winning work depicting fallen gladiators being dragged out of a bloody arena.

I could still smell the whiff of cordite in the air on Mendiola at the time, the first bloody demonstration in the post-Marcos era that I covered as a United Press International reporter.

Cory  Aquino, however, fought the peasant pressure and instead tossed the issue to Congress. The result was a watered-down version of CARP, with loopholes that allowed big landed estates to hold on to their estates to this day.

In 1989, her family’s Hacienda Luisita was first to take advantage of the exception to outright land distribution by hammering out instead a scheme that purportedly made the farmers stockholders in the estate.

Tadeo attempted to launch a campaign inside the plantation for the repudiation of the scheme. That was an added incentive for his eventual incarceration, he claims.

The late nationalist Jose W. Diokno defended Tadeo, but he  died of cancer by the time a final decision on his case was handed down and Tadeo went straight to Muntinlupa.

Tadeo is nostalgic about his jail experience. “Muntinlupa was a microcosm of Philippine society,” he said. “It is a lake within a lake, like Taal Lake. A prison within a prison. Those who are in jail are the poor.”

The experience also steeled him for the battles ahead. “A warrior becomes stronger after being in prison because he is among the poor and feels their suffering,” he said.

He recalled a conversation with Fr. Joaquin Bernas who, like him, was a member of the Constitutional Commission that drafted Cory Aquino’s Constitution in 1987, both ardent social justice advocates.

“Why do you seek genuine land reform in a society ruled by landowners? It is like reaching for the moon.  It will never happen,” he quoted Bernas as telling him.

Up to now, he said, a quarter century later,  the promise of freedom from bondage to the soil remains unfulfilled.

(Next: There’s life after Hacienda Luisita)