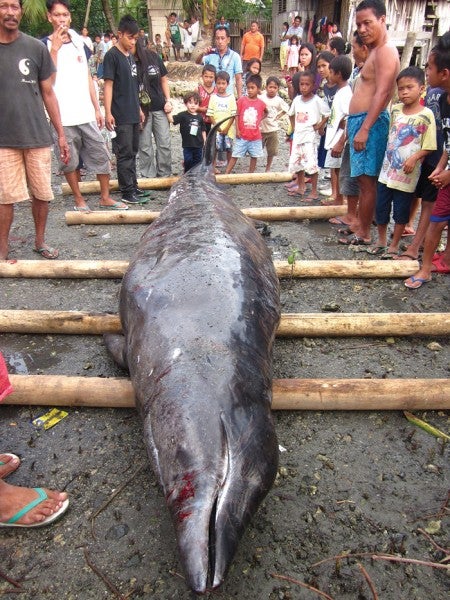 DAVAO CITY—A “super rare” ginkgo-toothed beaked whale (Mesoplodon ginkgodens) beached in Maco, Compostela Valley, on Wednesday but later died due to its failure to digest garbage and other debris it had eaten, a conservationist here said on Saturday.

“But about 10 in the morning, the whale died,” Blatchley told the Inquirer.

He said the whale, which has been transported to the D’Bone museum here for necropsy (an autopsy performed on animals), weighed about 800 kilograms.

“The whale died of indigestion. It has garbage debris in its stomach when we did the necropsy,” Blatchley said.

Blatchley said the whale retrieved in Maco was only the second of its kind seen in the Philippines since 1957.

In fact, it is so rare that there are only a few of such whales discovered around the world.

There is a little known fact about the ginkgo-toothed beaked whale, which is among the 21 species of beaked, medium-sized whales with distinctive, long and narrow beaks and dorsal fins near the tail, but it has been spotted in areas around the Pacific and Eastern Indian Oceans, he said.

“Very little is known about this whale. It is presumed to have food habits like those of other beaked whales and probably subsists on squid and open-water fishes,” FAO said.

“It is a fairly typical-looking species but is notable for the males not having any scarring,” FAO said, adding that the mammal was named for the unusual shape of its dual teeth, which is similar to the leaf of the ginkgo biloba plant.

This type of whale, FAO said, can grow up to 4.9 meters long from its birth length of 2.4 meters.

Since its discovery in the 1950s, there were only about 20 beachings reported off the coasts of Japan, the Galapagos Island, California, Australia, New Zealand, Sri Lanka and Maldives, FAO said.

Some fishermen off the coast of Japan also reported limited sightings of the whale, which was why it was difficult to estimate its population in the wild, it added.

Because it is super rare, the ginkgo-toothed beaked whale is covered by the Memorandum of Understanding for the Conservation of Cetaceans and Their Habitats in the Pacific Islands Region, which was pushed by the Convention on Migratory Species and was signed in 1996 by at least 15 countries, including the United States.

The Switzerland-based International Union for Conservation of Nature (IUCN) even put the whale on its Red List.

“Until the species can be reliably identified at sea, its true distribution will probably remain unknown,” the IUCN said. Dennis Jay C. Santos, with a report from Allan A. Nawal, Inquirer Mindanao