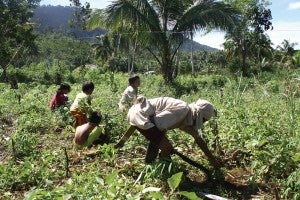 With forest denudation identified as among the reasons for the devastation wrought by Typhoon “Pablo” in Mindanao, cooperatives on the island embarked on a massive tree-planting campaign last week.

On Dec. 10, at least 6,000 tree seedlings were planted in various areas by members of cooperatives hoping to prevent future flash floods and landslides and to raise awareness on the Mindanao Nurturing Our Waters (MindaNOW) program of the Mindanao Development Authority (Minda).

Minda is a government development agency under the Office of the President. Its MindaNOW project aims to consolidate all efforts for the development and management of Mindanao’s watersheds and river basins.

“We thought of tying up with Minda under its MindaNOW program to align our efforts with the national government’s thrust on the national greening program,” said Bernadette Toledo, chief executive officer of Mindanao Alliance of Self-help Societies-Southern Philippines Educational Cooperative Center (Mass-Specc).

The cooperatives have been planting trees in the past years, but not as massive as last week’s activities, Toledo said in a statement. Mass-Specc is composed of 300 primary cooperatives all over Mindanao, with combined assets worth at least P11 billion and gross membership of more than 1.5 million.

While eradicating poverty was one of the primary roles of a cooperative, Toledo said Mass-Specc had launched a program dubbed “Co-ops Love Green Earth,” pointing out that sudden floods and landslides have become serious threats not just to Mindanao’s economy but also to the lives of its people.

“We’ve learned our lessons from Tropical Storm ‘Sendong’ to Pablo. We at Mass-Specc see the need for a long-term solution to these problems,” she said.

While the organization hopes to contribute to efforts to help the country achieve its millennium development goals of eradicating extreme poverty and hunger, Toledo said the cooperative principles have also expanded to ensuring environmental sustainability.

Cooperatives are mandated to allot, at most, 10 percent of their net surplus for the  community development fund, which includes allocation for green projects, she said.

“This is where we get our financial resources for the Mindanao-wide tree growing,” Toledo said.

To sustain this undertaking, Mass-Specc agreed to provide host communities and partner organizations with livelihood opportunities.

Manny dela Peña, a board member, said the livelihood opportunities were aimed at ensuring that the trees planted would serve their ultimate purpose of preventing flooding in the lowlands.

“In areas where we are going to grow timber trees, Mass-Specc will pay for the honoraria of the caretakers for them not to cut down the trees to make way for kaingin (slash-and-burn farming),” Dela Peña said.

In other areas where fruit-bearing trees were planted, host communities could turn their harvest into cash in three years, he added.

Toledo said Mass-Specc was also willing to extend other forms of assistance—from farm inputs to capability building activities—to ensure that the planted seedlings are nurtured.

“Minda welcomes this partnership with Mass-Specc, and we hope that more organizations, big or small, will join our cause,” he said.

“How can we allow that when we have our watershed, which is our source of drinking water up there?” he asked. Most of the trees found all over town in the aftermath of the typhoon were “uprooted trees and not cut ones,” he added.

“The typhoon uprooted those trees,” he said. “We are already fallen and we felt like being kicked again by these charges [of hosting illegal mining and logging].”

A longtime resident of Barangay Andap, the hardest-hit area of New Bataan, said logging operations were indeed prevalent in the town but these happened years ago.

Compostela Valley Gov. Arturo Uy also said no mining activity had taken place in Andap in recent years. “How can mining be allowed there when it’s a tourist area?” he asked.

Uy said it was also unfair to blame mining as a worsening factor because even in known mining areas such as in Maragusan and in Mt. Diwalwal in Monkayo, only a few people had died. With reports from Dennis Jay Santos and Frinston Lim