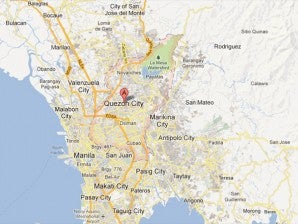 MANILA, Philippines—Two suspected robbers were injured but were able to escape authorities after they robbed a businesswoman of her earnings inside a market in Quezon City early Wednesday, police said.

Police Officer 3 Louie Reyes said the two still unidentified men were onboard a motorcycle when they robbed chicken meat trader Marilou Gubat inside the Suki Market in Dapitan-Mayon, Quezon City around 9:30 a.m.

The robbers were able to take from the victim P100,000 in cash, a mobile phone and a wristwatch, according to radio reports.

“Sugatan ‘yong dalawang suspects kasi natamaan sila ng pulis natin,” he said, but added, however, that the suspects were able to escape.

Reports said the wounded suspects left behind their motorcycle along Sampaloc, and transferred to a light blue Montero with license plate number NOW 246. The transfer was said to have been caught by a security camera.

“No one was wounded from the side of authorities,” Reyes said.