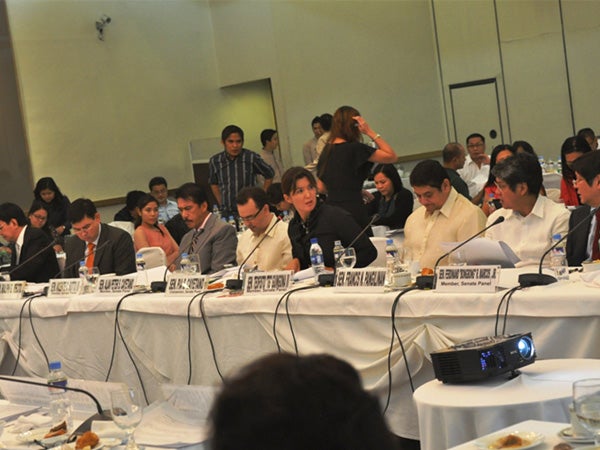 Senator Pia Cayetano (center) during the bicameral conference committee meeting on Reproductive Health bill held at the Century Seafood Restaurant in Manila on Wednesday, Dec. 19, 2012. Photo from the office of Sen. Pia Cayetano

The reconciled bill will now be returned to the Senate and the House of Representatives for ratification.

Once ratified by both chambers, the bill will be transmitted to President Benigno Aquino for signature.

“The RH bill has been approved in the bicameral committee,” Cayetano reported at a press conference after the meeting.

She admitted it was “not a perfect” bill but said it was the “best” that they could have.

Under the approved bill, Cayetano said reproductive health and sexuality education should be given to adolescents covering those aged between 10 and 19.

She said the bicam committee also agreed to adopt the Senate version that would allow any person access to RH services, including contraceptives, except minors without a written consent of parents or guardians.

But minors who are already parents or sexually active may also have access to contraceptives.

Albay Representative Edcel Lagman said the committee also agreed that the RH services should be a joint responsibility of the national and local governments.