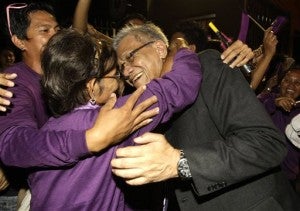 Rep. Walden Bello, right, is hugged by supporters as the House of Representatives pass a landmark measure that would provide government funding for contraceptives and sexuality classes. AP

MANILA, Philippines — The leader of the political party Kapatiran said on Tuesday that Filipinos opposed to the reproductive health bill could resort to a people’s initiative to repeal the measure upon its signing into law by President Benigno Aquino III.

“To all those who believe that the RH bill is an unjust bill, don’t worry. We will repeal it via Republic Act No. 6734 (Initiative and Referendum Act). While the RH bill takes precedence in the order of priorities, there are many other issues… and with God’s grace, we will crush them one by one,” John Carlos “JC” de los Reyes said in a public post on his Facebook account.

Ang Kapatiran (The Brotherhood) Party obtained last week from the Commission on Elections the prescribed format for an initiative for a national law. The form was earlier requested by the party for its planned initiative against political dynasties.

De los Reyes did not say whether the initiative against political dynasties would be prioritized over RH. The party would probably consult with other anti-RH groups. Some pro-life advocates have earlier said they will raise the RH controversy to the Supreme Court.

RA 6734 provides that for an initiative to succeed, proponents must be able to gather the signatures of at least three percent of the registered voters in each legislative district.

Kapatiran is a member of the Prolife Coalition, a grouping of various nongovernment organizations allied with the Catholic Bishops’ Conference of the Philippines’ Episcopal Commission on Family and Life. The coalition is at the forefront of blocking the passage of the proposed legislation contending that it violates the sanctity of human life and provisions of the Constitution.

De los Reyes, a theology graduate of the Franciscan University of Steubenville in Ohio, said the Church has been opposing the RH bill because “the use of contraception generates pedophobia, a fear or distaste for children. Pedophobia invites abortion, many times when contraception fails. There is a difference between a reverence and an openness to life in natural family planning and a deliberate distrust/dislike for it.”

Kapatiran is probably the only political party in the country that has an anti-RH stand.

“Kapatiran upholds human life in all its forms and stages. All are important. One aspect of human life affects another. The precondition for sustaining a consistent ethic of life is a ‘respect life’ attitude or atmosphere in society. Where human life is considered cheap and easily wasted, eventually nothing is held sacred, and all lives are in jeopardy,” the party said on its website.

The party said a consistent ethic of life meant “being pro-life across the board,” and this would include opposing abortion, artificial contraception, the death penalty, euthanasia, types of sports whose main aim is to inflict physical violence or harm on the opponent, torture to extract confession from an accused or a suspect, hazing, maltreatment of prisoners, fraternity violence, the culture of guns, arms race, etc.

Kapatiran, which is participating in next year’s legislative and local elections, believes that a consistent ethic of life should be the moral framework within which all issues in the political arena are to be addressed.

“The consequence of a consistent ethic of life is the provision of a standard to test public policy, party platform and the postures of candidates for public office,” it said.