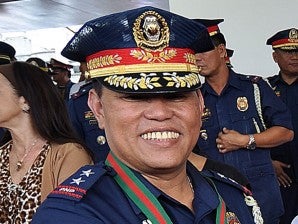 MANILA, Philippines–Deputy Director General Alan Purisima formally took over the reins of the
Philippine National Police, putting under his leadership on Tuesday a 148,000-strong police force.

In a change of command ceremony at the PNP’s Camp Crame Headquarters in Quezon City, Purisima assumed the organization’s leadership from Director General Nicanor Bartolome.

The ceremony started around 10 a.m., with President Benigno Aquino III as the guest speaker.

It was highlighted by the symbolic handing over of the PNP flag and saber from Bartolome to Purisima.

During the valedictory address, Bartolome said he is confident he will leave the organization with his men armed with greater dignity and skills.

He attributed this to the strengthened morale and welfare programs for PNP personnel, which include housing and educational assistance programs, health assistance with its six improved PNP Regional Hospitals, and the 100-percent fill-up in short firearms for every personnel.

“To cap it all, our PNP personnel now enjoy higher salaries with the implementation of the fourth tranche of the monthly salary schedule. We thank our Commander-in-Chief for making this possible. [Because of our guidance, police officers are providing service to the public with pride],” Bartolome said.

Meanwhile, with disciple being the central focus of his leadership, Bartolome noted that he had given 250,938 awards, 29,790 promotions, as well as dismissal to 223 erring personnel, demotion to 66 others and suspension to 481.

He also noted that the PNP’s anti-criminality program garnered an approval rating of 56 percent in May 2012 as per a survey conducted by Pulse Asia.

“Though fifteen months may not have been enough to achieve all that I have set out to do, I now stand before you, fulfilled and happy in the thought that I have done my best, but with a heart made heavy with the fact that I could have done more,” Bartolome said.

Bartolome, a member of the Philippine Military Academy Class of 1980, was scheduled to retire on March 16, 2013, but opted to make an early exit to give way to Purisima’s getting his fourth star as the PNP chief.

Reports had it that that President Benigno Aquino III was looking into placing Bartolome on “non-duty status” before the end of the year for him to be able to appoint Bartolome’s successor before the election ban for next year’s midterm election starts.

If Bartolome opted to go for the non-duty status, he will keep his four-star rank until he retires on March 16, creating complications to Purisima’s promotion as Director General as he is to remain a three-star general like his subordinates until the post is formally vacated.

“Having been a major player in the 2010 elections, I fully support the efforts of the incoming PNP leadership in ensuring another safe and peaceful election in the country,” he said.

“As I carried on from where my predecessor left off, I now step down confident in the fact that I am relinquishing command over the PNP to an officer who has the same heart and passion for service, and who, I am certain, will carry on as well with the same dedication and commitment to the ideals of the police service,” Bartolome added.

Teary-eyed Bartolome dedicated the middle portion of his speech thanking everyone who has helped him during his 37 years in government service.

(I’m Nicanor Ancheta Bartolome who will always keep in my heart, my thoughts and in spirit the words ‘I have been a police officer, your police officer’ upon my stepping down from my post today.)

Interior Secretary Manuel Roxas II earlier expressed his appreciation for the “sacrifice” Bartolome made when he voluntarily agreed to retire early “in the interest of the service.”

Roxas also extended his gratitude to Bartolome for the legacy he left behind in the PNP.

“General Bartolome has served with distinction and honor. His service to PNP is marked by his motto “serbisyong may pagkukusa [service with initiative].

The policy changes, with respect to capability, discipline, and sensitive policing, are also a hallmark of his administration,” Roxas said.

“I am indeed happy to formally turn over the responsibility as chief of the PNP to a very well-rounded and very much prepared senior (PNP) officer,” Bartolome earlier said.

He said he was looking forward to spending the first few months of his civilian life with his family after his 37 years in the government service. Bartolome also said he is set to get a knee surgery.

Among Bartolome’s latest achievement as chief of PNP was the procurement of 59,904 pistols for the entire police force, the largest procurement PNP has made in the recent past.

“Dream of a lifetime”

In his assumption speech, Purisima said he is celebrating a “dream of a lifetime”—“a dream that every policeman hopes to achieve.”

“But as I bask in glory, I am well aware that this moment is but a moment and the hard work is about to begin,” he added.

Purisima said he consider his men as the “cutting edge” of the organization.

(…you are tasked to provide the best and true service at all times. If your cutting edge gets worn out, the effectiveness of the whole police force loses its sharpness.)

To ensure that PNP’s cutting edge remains sharp, he said the competence of PNP should be enhanced, organizational development reforms should be undertaken, discipline should be instilled within the ranks, excellence should be promoted, and professionalism at all levels of the organization should be instituted.

“Through this Strategic Focus, we will bring to the fore a new breed of professional Police Officers who share one vision and objectives,” he said.

Purisima, the 18th chief since PNP was formed in 1991, was a member of the Philippine Military Academy “Dimalupig” Class of 1981.

Purisima was a former aide of the late President Corazon Aquino, among other key posts in the police force, including being the former director of the National Capital Region Police Office.

(I know we will face a more difficult challenge in the coming days, especially on the preparation for credible, peaceful and orderly elections in May 1013. I will be confident that our organization can meet this challenge and achieve our objectives.)

Read Next
Estrada: ‘I will go down with Enrile’
EDITORS' PICK
EDITORIAL: To a bike-friendly future
The Best Tech Gifts For The 2022 Holidays
Is it safe to talk politics again at family gatherings? ‘The Reconciliation Dinner’ shows us what that’s like
House energy committee chair Arroyo bats for cheap electricity
vivo’s coming to town to grant wishes with more holiday promos
Pagasa: Warm, sunny Sunday in most parts of PH
MOST READ
LOOK: Vhong Navarro transferred to BJMP detention facility in Taguig
The Elephant Man in the Senate
Posh village as ‘shabu’ haven
LOOK: Zanjoe Marudo bonds with Ria Atayde, her family
Don't miss out on the latest news and information.