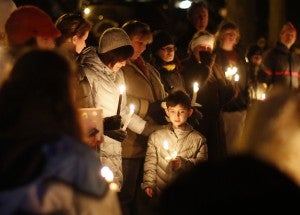 Mourners gather for a candlelight vigil at Ram’s Pasture to remember shooting victims, Saturday, Dec. 15, 2012 in Newtown, Connecticut. President Barack Obama was due in Newtown on Sunday to join in an interfaith vigil for the 20 small children and seven adults slaughtered by a young gunman. AP PHOTO/JASON DECROW

NEWTOWN, Connecticut—President Barack Obama was due in the small Connecticut community of Newtown on Sunday to join in an interfaith vigil for the 20 small children and seven adults slaughtered by a young gunman.

The president’s visit comes two days after the heavily armed 20-year-old, Adam Lanza, stalked into the Sandy Hook elementary school and raked students, teachers and administrators with gunfire, after first killing his mother in their home – in one of the worst mass shootings in US history.

The tragedy has revived calls for a debate on gun control, though the White House has scotched any suggestion that the politically explosive subject would be quickly reopened.

And the political ramifications were far from the minds of most in this picturesque dormitory town, where parents of both the survivors and the dead were struggling to come to terms with the horror.

The White House said the president will meet with families of the victims and thank first responders. He is also scheduled to speak at the vigil Sunday evening for the families of victims and others from the elementary school.

A memorial was held Saturday evening for one of the victims, 27-year-old teacher Victoria Soto, who died trying to protect her students, according to media reports.

Robbie Parker, a 30-year-old hospital physician’s assistant who cares for sick newborns, said the death of his loving six-year-old Emilie should “inspire us to be better, more compassionate and caring toward other people.”

And he included the family of the apparent shooter, 20-year-old Adam Lanza, in his condolences, addressing them through the news media to say: “I can’t imagine how hard this experience must be for you.”

Robert and Diane Licata described how their six-year-old son Aiden ran past the shooter in his classroom doorway to escape after seeing his teacher gunned down – and recounted their desperate search for him.

“When you’re standing there waiting, and no one will tell you anything—it’s an indescribable feeling of helplessness.”

Licata eventually received a text that her son was safe at a nearby police station, and he was later able to explain his escape.

She said his class heard noises that initially “they thought were hammers falling. Then they realized that it was gunshots,” she said.

“Aiden’s teacher had the presence of mind to move all of the children to a distance away from the door… and that’s when the gunman burst in,” Licata said.

The gunman had “no facial expressions” she said, adding that he “proceeded to shoot their teacher.”

Following drills that many US children are taught as to how to react during an emergency, Aiden and his classmates quickly made their way to the door where the gunman was standing and ran past him. Some of them survived.

“He really, really, really cared about his teacher. He was very close with her, and she really loved that class. He keeps saying, ‘I really hope she’s okay, I hope it’s not her,’” the boy’s mother said.

“He knows that she’s been hurt but he doesn’t know the end result. He knows the kids that he saw getting shot.”

A police spokesman said Lanza is believed to have shot his mother at the home they shared before heading to the nearby school and launching his attack.

He had two handguns, but the coroner told reporters that most of the children and staff were killed by multiple gunshots from his assault rifle, a .223-cal. Bushmaster, a civilian version of the US military’s M4.

Connecticut Chief Medical Examiner H. Wayne Carver said the rifle fires rounds “in such a fashion that the energy is deposited in the tissue, so the bullet stays in.”

Lanza’s father, Peter, expressed shock and grief at the horror caused by his son.

“No words can truly express how heartbroken we are,” he said in a statement vowing to continue cooperating with law enforcement.

“We, too, are asking why,” he said. “Like so many of you, we are saddened and struggling to make sense of what has transpired.”

Connecticut State Police released the identity of the victims, aged six to 56. They included 16 six-year-olds and four seven-year-olds.

Twelve of the 20 slain children were girls and eight were boys.

The six adults killed at the school were all women, including the school’s principal and its psychologist.

The motives of the shooter were the biggest mystery. Carver was to have conducted a post-mortem on Lanza and on his mother late Saturday.

Asked whether any suicide note, e-mails or other clues into the killer’s mind had been found, Connecticut State Police spokesman Lieutenant J. Paul Vance said investigators have gathered “some very good evidence.”

Vance said the crime scene investigation could go through the weekend.

Although he was remembered as a shy, awkward and nerdy boy, Lanza had not apparently given any warning sign that he was a mass murderer.

The weapons, news reports said, were registered in his mother’s name, but she was widely seen as an unremarkable and upstanding resident in the town.

The tragedy drew messages of support from around the world, and candlelight vigils have sprung up in the area.

The National Football League announced its games will hold a moment of silence Sunday to remember the victims, with the New York Giants and New York Jets planning to wear an adhesive strip on their helmets marked “SHES,” the acronym of the elementary school.

Of all US campus shootings, the toll was second only to the 32 murders in the 2007 massacre at Virginia Tech University.

The latest number far exceeded the 15 killed in the 1999 Columbine High School massacre, which triggered a fierce but inconclusive debate about relaxed gun control laws in the United States.