‘Lubenas’ is alive in Angeles City 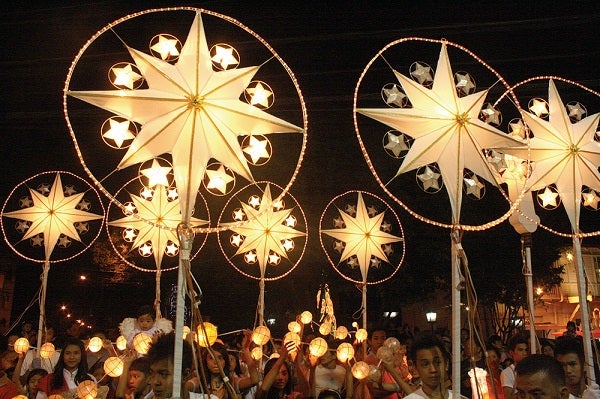 THE CHRISTMAS tradition of “lubenas” or procession of saints lit by lanterns has enjoyed a revival in Angeles City. E.I. REYMOND T. OREJAS/INQUIRER CENTRAL LUZON

ANGELES CITY—In 2000, when the heritage advocate Kuliat Foundation Inc. (KFI) revived the “lubenas” in this city, only five of 33 villages were still doing the Christmas tradition that used to be popular during the Spanish colonial era.

Lubenas, a local name for novena, consists of street processions held for nine straight nights for the Missa de Gallo. Candle-lit, white paper lanterns shaped into crosses, stars, fishes, angels and sheep illuminate the images of patron saints of villages during the processions.

The tradition started when the town of Angeles, known then as Kuliat, a village of San Fernando, celebrated La Naval Fiesta in October 1830, the late historian Mariano Henson wrote in the “History of Angeles Town.”

But 170 years later, only the villages of Lourdes Sur, Pampang, Pulungbulu, San Jose and Sto. Rosario did the lubenas.

On the 12th year of reviving the lubenas this year, the number of participating villages has risen to 10.

Rosalie Naguiat, KFI president, said Cutcut won the best lubenas for the third straight year. Village chief Cecille Nepomuceno virtually mobilized all sectors in her village, which was how the lubenas went in olden times.

“The 23 villages are not regularly into the lubenas. Some would join for some time, like Margot and Balibago. It depends on the barangay captain, on resources or on the presence of elders who still sing ‘Dios te Salve,’” said Joy Cruz, KFI executive director.

Cruz said the city government shouldered the cost of the “maytinis” or the converging of the participating villages in front of Holy Rosary Parish. The city government also provided each village P5,000 as well as cash prizes.

Jessie David, 73, said the lubenas used to be simple in his time. “What I like about the lubenas now is that many young people are joining it. The chanting of ‘Dios te Salve’ should be taught to them, too,” said David, a former Clark Air Base worker.

Robby Tantingco, executive director of the Center for Kapampangan Studies, said the tradition has survived in the old district of Angeles, which is near the Clark-Balibago commercial district.

“It just goes to show how deep the religiosity of Angeleños are,” he said.

The lubenas continues in the cities of Mabalacat and San Fernando and in the towns of Mexico and Magalang in Pampanga, as well as in Capas and Concepcion towns in Tarlac.

“While the government and nongovernmental organizations must be commended for their good intentions, the local church should find ways to reclaim and sustain this charming Kapampangan tradition and reassert its original religious intent and content,” Tantingco said.  Tonette Orejas, Inquirer Central Luzon