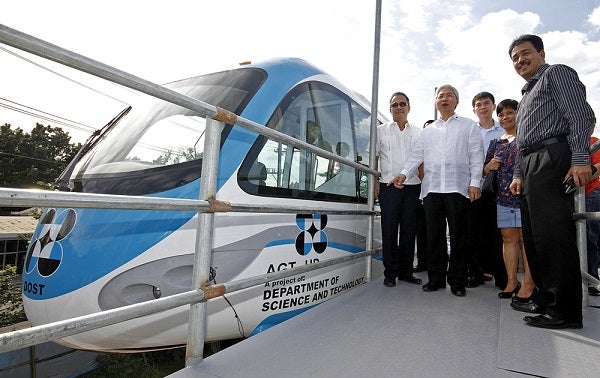 A  FAST, comfortable train ride with a fabulous view of the campus greenery.

This is what riders will experience when the train system on the University of the Philippines campus in Diliman, Quezon City, is fully operational.

Hours before Friday’s annual Lantern Parade, UP officials hopped aboard the university’s own monorail for a quick joyride to test their new wheels.

“We are looking out for the small things such as comfort to improve the train system. So far, so good,” said Science and Technology Secretary Mario Montejo, whose agency spearheaded the development of the 465-meter long monorail. 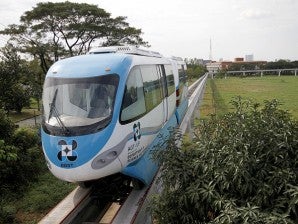 DILIMAN EXPRESS. The Automated Guideway Transit (AGT) makes a test run on the 495-meter-long elevated track on the UP Diliman campus on Friday. The 30-passenger coach is fully automated, driverless (and) electricity-run,” according to Science Secretary Mario Montejo. It’s right on track with a fabulous view of the campus green. RAFFY LERMA

The Automated Guideway Transit (AGT)—a project of the Department of Science and Technology and UP—made its maiden trip Friday, nearly a year and a half after  it was launched at groundbreaking ceremonies.

UP President Alfredo Pascual said the test run was just “on schedule.”

“We hoped to make a test run in time for the Lantern Parade, so I guess we beat the deadline,” he said  after  taking a ride in   one of the two air-conditioned coaches.

Select UP and DOST officials rode the monorail’s test track from the College of Fine Arts on E. Jacinto Street to C.P. Garcia Avenue and back, with each trip taking less than five minutes.

From the monorail, one could see the UP’s  green landscape, albeit at a slower pace.

“Will there be an announcement at the approach of each station too?’” one of the passengers asked, comparing the system to the MRT and LRT network.

Constructed by Miescor Builders Inc. to the tune of P31 million, the AGT stands on a 6.1 meter-high, 465 meter-long track and runs on rubber wheels to reduce the  noise factor.

Montejo said the AGT is an entirely Filipino venture and will be a “fully-automated, driverless” electricity-run monorail.

The interiors of the 30-passenger coaches are similar to the MRT coaches, although on a smaller scale.

Construction on the project began this year, taking six months to complete.

Friday’s test run was at a speed of 10 to 12 kph or 15 Hertz of electricity, but Montejo said the monorail can go up to 45 kph.

The monorail will be evaluated by a team from the UP College of Engineering and the National Center for Transportation Studies for two months, or until February.

“We will look at the project’s feasibility to see if this is a better option,” Pascual said when asked if the tracks would be extended to cover other parts of the campus.

Electricity-run mass transport is an answer to mitigating the effects of climate change, he added.

Montejo said they are thinking of getting a “critiquing public” who will ride the monorail on invitation to assess the ride.

Since the AGT is Filipino-made, its cost is only a fifth of prevailing costs, but is still competitive in quality, the secretary said.

And if future passengers are worried about train fares, the monorail is not a money-making venture, he added.

“This is a developmental project,” Montejo said.

TAGS: Metro, monorail, News, University of the Philippines (UP)