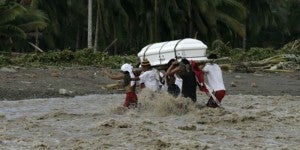 Relatives cross a river to bury their loved one, who died in a flash flood caused by Typhoon Bopha, Thursday, Dec. 6, 2012, in New Bataan township, Compostela Valley in southern Philippines. The powerful typhoon that washed away emergency shelters, a military camp and possibly entire families in the southern Philippines has killed hundreds of people with nearly 400 missing, authorities said Thursday. AP Photo/Bullit Marquez

The number of people missing jumped to nearly 900 Monday after families and fishing companies reported losing contact with more than 300 fishermen at sea who set sail despite warnings that Typhoon “Pablo” was barreling toward Mindanao.

Military authorities announced in General Santos City that two ships from the Philippine Navy and two patrol boats from the Philippine Coast Guard would be used to search for 50 fishing vessels owned by eight different companies off the Surigao provinces and Davao Oriental.

Maj. Gen. Jorge Segovia, chief of the Eastern Command, on Sunday met with the head of the Armed Forces of Indonesia for permission to conduct search and rescue operations in Indonesian territorial waters, Navy Capt. Robert Empedrad told reporters.

Empedrad said the operations would last three to five days in Philippine territorial waters off Surigao and Davao Oriental all the way down to the rich fishing grounds near Indonesia. “Then, depending on results, we will decide whether to continue the search and rescue efforts,” he said.

Gov. Joey Salceda of Albay on Monday expressed concern that the Philippine Coast Guard did not enforce a no-sail-at-sea policy and that the fishing companies put at risk the lives of fishermen by allowing them to sail in spite of advisories issued by the Joint Typhoon Warning Center at Pearl Harbor in Hawaii as early as Nov. 23.

“With this regulatory regime, corporate behavior and predisposition of our elite, one should not wonder why this archipelagic nation can never achieve zero casualty. I want to faint, since it is fast becoming a fashionable statement,” Salceda said.

He obviously referred to pronouncements by officials before Pablo (international name: Bopha) struck that preparations in place would minimize the loss of lives.

Salceda’s preparedness program in Albay, doormat to storms blasting the country from the Pacific, has been credited with saving lives.

The National Disaster Risk Reduction and Management Council (NDRRMC) said Monday 647 corpses had been recovered after landslides and floods obliterated entire communities in the typhoon’s path. Of the 900 missing, 300 were fishermen and another 400 were from the hard-hit town of New Bataan.

Benito Ramos, executive director of the NDRRMC, said   many of those missing could be among the hundreds of unidentified bodies, many of them bloated beyond recognition.

Ramos said the fishermen from General Santos City, the country’s tuna capital, and Sarangani left a few days before Pablo made landfall in Mindanao.

Ramos said the fishermen were headed to the Spratly Islands in the West Philippine Sea and to the Pacific Ocean.

Coast Guard boats, Navy ships and fishing vessels are searching for them, and some may have sought shelter on the many small islands in the area. “Maybe they are still alive,” Ramos said.

Eleven of 50 missing vessels are mother boats. The rest are light and carrier boats.

“There’s a possibility that the missing fishing boats just drifted somewhere else. Either they ran out of fuel or their communication gadgets were destroyed by the typhoon, the reason why they lost contact with their employers,” Lu said.

Rescuers were searching for bodies or signs of life under tons of fallen trees and boulders in New Bataan, where rocks, mud and other rubble destroyed landmarks, making it doubly difficult to search places where houses once stood.

He also said that the patrol ship BRP Davao del Norte was heading back to Cateel, Davao Oriental, to deliver relief goods.

Pablo was dissipating finally in the West Philippine Sea after briefly veering back toward the country’s northwest on Saturday, prompting worries of more devastation.

The typhoon destroyed about 18 percent of the banana plantations in Mindanao, causing losses estimated at P12 billion pesos, according to Stephen Antig, executive director of the Pilipino Banana Growers and Exporters Association.