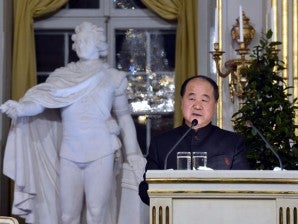 BEIJING — Nobel literature laureate Mo Yan was assailed Saturday in the Chinese dissident community as a “prostitute” following his Nobel lecture, but the speech was acclaimed in the communist state’s media.

In the lecture in Stockholm on Friday, Mo, the vice-chairman of the government-backed China Writers’ Association, took a swipe at his critics, saying their target “had nothing to do” with him and urged them to read his books.

Mo has walked a tightrope during his stay in Stockholm, where he will pick up the literature prize on Monday, with some pundits supporting his own claims that he is “independent”, and others casting him as a Beijing stooge.

In China, his delivery of the annual Nobel Lecture in Literature did little to dispel the divide.

“In the last few days, he has defended the system of censorship… then in his lecture he talks about story telling — to use a Chinese expression, he is like a prostitute insisting her services are clean,” dissident poet Ye Du, a member of the non-government Independent Chinese Pen Center, told AFP.

“As far as an assessment of him, in literature he has some merit, but as a living human being, he is a dwarf.”

Ye said Chinese intellectuals had hoped Mo would use the lecture to renew his call for the Chinese government to release jailed 2010 Nobel Peace Prize winner Liu Xiaobo, but instead he voiced support for China’s system of state censorship.

State media covered Mo’s lecture widely, focusing on how he grew up in rural China with an illiterate mother and detailing the inspiration he drew in penning such novels as “Red Sorghum”, “Frog”, “Life and Death are Wearing Me Out”, and “Big Breasts and Wide Hips”.

His victory had brought Chinese literature into the world spotlight and will help bridge the gap between Chinese culture and the rest of the world, the official Xinhua news agency cited Lan Lijun, Chinese ambassador to Sweden, as saying.

“This is the first time that a non-dissident Chinese has won a Nobel prize, so it is not Mo Yan’s fault that the state media is praising him,” a Beijing intellectual, who only wanted to be identified by her surname Wang, told AFP.

“It is clear he is against censorship, but he lives in China and he has the freedom to choose not to take on the views of a dissident.”

Chinese dissident artist Ai Weiwei condemned the lecture in a tweet, saying “Mo Yan’s talk about story telling is about covering things up and hiding, it was powerless, disgraceful, a betrayal and a sellout.”