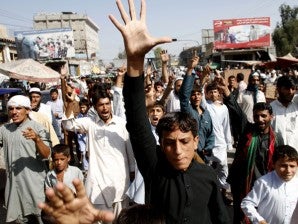 DUBAI – A US air strike in Pakistan has killed an Al-Qaeda leader, Khaled Bin Abdel Rahman al-Hussainan, while he was having dinner after a day of fasting, the group announced late Friday.

The militant, also known as Abu Zaid al-Kuwaiti, was killed when he was having a late dinner after fasting during the day, the group said in a brief statement posted on several jihadist websites.

“We announce the martyrdom of Sheikh Khaled al-Hussainan who died as he was having his sohur meal and we pray to God to accept him in heaven,” the statement said.

US television network NBC News quoted terrorism experts saying that the militant, a 46-year-old Kuwaiti, was a second generation leader of Al-Qaeda.

They said he was among those who could have replaced Ayman al-Zawahiri as head of the extremist network, adding that the militant had been killed in a drone attack.