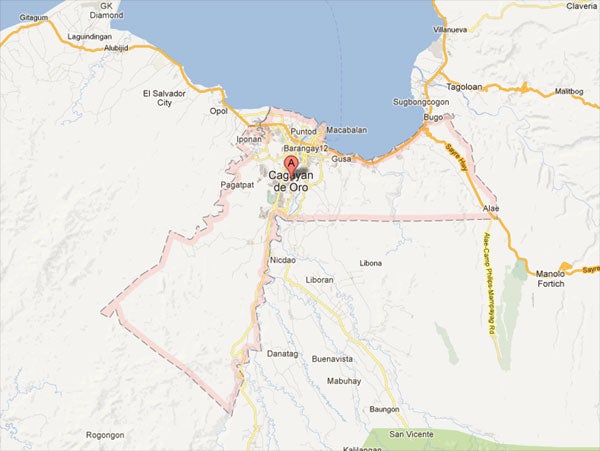 CAGAYAN DE ORO CITY, Philippines — With toppled trees and debris scattered everywhere, residents of this city must have thought that the worst of Pablo had passed.

But around 2:30 p.m. on Wednesday, hours after the rains that Pablo brought in stopped, the church bell from the San Augustine Metropolitan Cathedral, which stood by the Cagayan River, started ringing.

The scene was akin to one plucked out of a World War II movie, where people were fleeing as the church bells rang, warning them of the arriving Japanese soldiers.

The reason for the ringing bell on Wednesday here, however, was that the water level at the Cagayan River started to swell, albeit slowly.

At the Carmen Bridge, curious people converged and watched as muddy water flowed underneath it. Others trooped to the nearby Kagay-an Bridge.

In Lower Tambo in Barangay (village) Macasandig, an area that Sendong heavily devastated in 2011, Kristeta Bisandi, 59, was seen hurriedly leaving her house and sari-sari store, about 500 meters away from the river, as the sirens of a fire engine also sounded.

She and her husband immediately ran towards the nearest evacuation center.

“It was our signal to run.  Our barangay had trained us after Sendong for an evacuation like this,” Basand told the Philippine Daily Inquirer.

Soon after they and their neighbors had fled, the floods engulfed their houses. Estimates vary about the actual depth of the flood but authorities said it reached five feet in some areas of Tambo.

Barangay Macasandig, considered as the ground zero during the Sendong disaster, is a recipient of the Noah’s Ark program of the Corporate Network for Disaster Response (CNDR) for flood-prone communities. Under the program, civilians were trained on orderly and pre-emptive evacuation.

According to Bisandi, the evacuation process in their barangay was organized soon after the Sendong tragedy in 2011.  As early as Sunday, residents were already packing their belongings and heading toward designated evacuation centers.

During the flash floods last year, the Bisandi couple and four other families climbed up a Mahogany tree beside their shanties.

The tree has become an important reminder of her Sendong experience, she said.

“I was planning to offer food to the tree on December 17 because it saved a lot of us here, but now, all the stocks from my store have been washed away,” she said asnews about rampaging water gobbling up her house reached her at the evacuation center.

Only about a month ago, Bisandi said, she was able to borrow P10,000 from her landowner. She used the money to buy supplies for her store and was beginning to be hopeful that their lives would get back to normal after what happened during typhoon Sendong.

“When I came back to check on my house this morning, everything was gone. It was like the river once again took away what my husband and I worked hard for,” she said.

As Bisandi was recalling the events, some of her neighbors, who were busy taking out muddy water from their houses were saying, “What a nice gift for us this Christmas.  It’s water and mud all over again.”

Bisandi, along with several of her neighbors, had applied for housing relocation for Sendong victims early this year.

However, their applications remain pending.

Another resident, Carolina Cadavez, once again had to remove muddy water from her house.  Last year, the waters had reached the ceiling of their second floor area. It was during Sendong’s fury that she almost lost her two sons, who had difficulty squeezing into a small opening at the ceiling.

This year, however, she made sure to evacuate her family a day before typhoon Pablo was expected to arrive.

“I felt that we were ready for the coming typhoon, but we still could not take everything. I feel sad about it because we had to work hard to recover what we lost during Sendong, but on the other hand, I realized that they are just things” she said.

Although Thursday’s floodwaters were only five feet deep, everything Cadavez had in her house was still damaged.

“The rise of the flood waters was slower this time compared to last year.  It was also less murky. During Sendong, we even smelled gasoline in the water,” she said.

Unlike her neighbor Bisandi, Cadavez is not yet thinking of getting a rented house somewhere far from Lower Tambo.    Her family owns the piece of land where she has been staying for more than three decades now.

“My family cannot afford to rent a house because we are just starting all over again. Now, we will just have to learn how to live with disposable things,” she said.