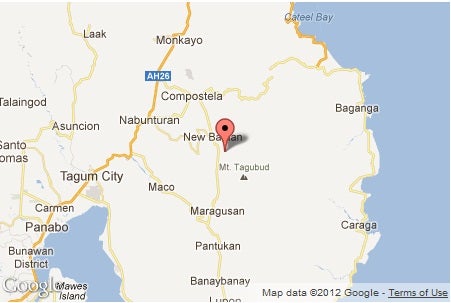 NEW BATAAN, Compostela Valley––Gomer Opiso thought for sure he was a dead man as he struggled to swim through a raging mudflow that swept his village on Tuesday, while dodging toppled coconut trees, mangled roofs and all manner of debris.

He recalled desperately gasping for breath each time his head dipped under the thick floodwaters that hurtled down the slopes of Barangay San Roque in this sleepy farming and mining town of 45,000 people.

At the end of his deathly ride, the 23-year-old charcoal maker found himself five kilometers away from home, looking and feeling like a battered man with his face and body covered in cuts, gashes, and bruises. But he was alive.

“Every time I bobbed my head out of the water, I was thinking that I was already dead. I lost consciousness. Then I woke up,” Opiso said.

On Day 3, similar tales of survival were rife here against a landscape of death and devastation wrought by Typhoon “Pablo” in a section of Mindanao that was, until now, spared by storms.

The human toll in Pablo’s wake was posted on a bulletin board in front of a multi-purpose hall at the town center, where dozens of bedraggled residents with mud-caked feet waited for relief goods, or for word about their missing loved ones.

While the fatality count in Compostela Valley had climbed to 92 as of midday Thursday, another tally was rising: some 38 of those previously declared missing were found alive, giving fresh hopes for the 353 who remained unaccounted for.

One of the survivors was Carlos Agang, who was found by rescuers by a river not far from the town center, immobile due to a broken leg. He told the volunteers he had survived on coconut water in the past two days.

Pablo had cut across the southern heartland like a scythe, rendering scores dead or homeless with its flurry of wind and water. But Opis recalled that the storm had actually barged in like a rampaging ship.

It was about 6 a.m. when Opis and his small family heard the storm roaring outside. Langwan, one of the rivers watering the town, had swollen to dangerous levels, he said. “It sounded like a ship was coming straight at us,” he said in Cebuano.

“I was holding hands with my wife and our daughter, then the water just slammed into our house. It was so strong, and we were separated. I felt like we were being spun around by the mud,” said Opis.

The house, with all its occupants inside, was swept away in the surge.

From a different vantage point, Pedro Cabuñas, 38, was warily watching the Mayo River from his small house in Barangay Andap, one of the hardest hit villages here.

Upon seeing the change in the river, he said he and his family quickly fled to the house of a cousin, along with the whole neighborhood of 10 families. “We crammed inside because we knew it was only a matter of time before the river spilled,” he said.

Cabuñas and his family survived but he said scores of others in his village were not so lucky.

“They huddled together in the barangay center thinking they were safe. But the whole wall of water crashed directly into them,” he said.

Unlike in New Bataan, in most other sections of the gold-rich Compostela Valley, the enemy was the wind, not the water.

Alfie Ayuban, a miner digging in Camanlangan, said he and his family huddled together inside their roadside home in Compostela Valley town as the storm raged outside.

“It was impossible to go outside to even take a look at what was happening. Galvanized iron roofs were flying around. You would die,” his neighbor, Lady Veloso, 34, said.

After it passed, Ayuban’s house was reduced to rubble. One of his neighbors, Ricaredo Ligayon, 77, was killed after a coconut fell on his head.

“We’ve been living here all our lives and this is the first time something like this has happened,” Veloso said.

Everywhere in Mindanao, this was a common lament for the second December in a row.

Marciana Cueba, a 67-year-old grandmother of four, wondered aloud why Mindanao was no longer being spared from storms. “We always thought we were safe. But now we know something like this can happen again,” she said.

Last year’s Tropical Storm “Sendong” struck parts of Visayas and Mindanao and ravaged the cities of Iligan and Cagayan de Oro, areas also previously thought to be off the path of storms. Sendong left 1,200 people in its wake.

The Manila Observatory in January observed that based on data from the US Joint Typhoon Warning Center, “roughly one typhoon cross Mindanao every 10 years.”

And on its Wikipedia page, New Bataan is described as a first class town in Compostela Valley “surrounded (by) mountain ranges that keep the place away from coming typhoons.” Clearly, that is no longer the case.