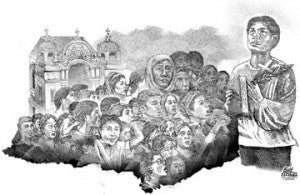 Cebu’s standing as the cradle of Christianity in the country takes center stage today as the nation gives thanks for the sainthood of Visayan teenage mission helper Pedro Calungsod.

Today, hundreds of thousands will flock to the South Road Properties along Cebu City’s seafront for the historic gathering. Catholic faithful will pay homage, with many bringing with them personal intentions of intercession to San Pedro Calungsod.

The road to the Visayan martyr’s sainthood has not been without potholes.

Days before his Oct. 21 canonization in the Vatican, the Catholic Church in Cebu was shaken by an exposé of the National Geographic Magazine which identified Cebu as one of the routes of illegally traded elephant ivory tusks turned into religious icons.

The construction of the Calungsod Templete at the SRP had its share of trials. Organizers had to overcome logistical shortfalls and bad weather that slowed down work.

Then came heavy rains last week that left the reclaimed property a field of mud.

Last Tuesday, the day the pilgrim image of San Pedro Calungsod arrived from a national pilgrimage in the Duaw Nasud, several teenage girls in the Don Vicente Rama National High School in barangay Basak-Pardo were caught up in a wave of mass hysteria. Worried parents feared that their children had fallen prey to malignant spirits.

Then last Wednesday the descration of the Birhen sa Regla (Our Lady of the Rule) in Lapu-Lapu City scandalized the faithful. Thieves broke into the glass urn and stole almost all the jewelry adorning the Marian statue, one of Cebu’s most revered religious icons. The crime, widely believed to be an inside job, was an insult to Oponganons and thousands of devotees.

Despite all these trials, there is no doubt the National Thanksgiving Mass will contribute positively to the country’s moral revival.

Despite differences between the dominant Catholic Church and the government on issues like the Reproductive Health bill, today’s national celebration is a display of unity, with no less than President Benigno Simeon Aquino III attending the event.

Amid the trials, we all share the vision of human nobility and serving a purpose bigger than our limited selves.

So thank you, San Pedro Calungsod, for reminding us all to pause and take the longer view.