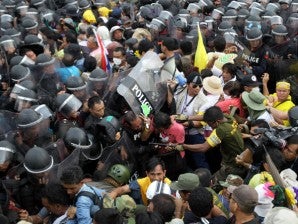 About 17,000 police were deployed for the rally in Bangkok’s historic district, which was organised by the royalist group Pitak Siam, a relatively new force in the kingdom’s fractured political scene.

“In the name of Pitak Siam and its allies I promise that we will topple this government,” the movement’s head, retired general Boonlert Kaewprasit, declared from the rally stage.

The authorities expected tens of thousands of people to attend the demo, which comes about two and a half years after dozens of people died in a military crackdown on opposition protests in the heart of the capital.

By early afternoon police estimated that about 12,000 people had turned out.

Police said they fired tear gas at a group of protesters who removed barbed wire and barriers blocking their route in front of a UN building close to the main rally site.

“Tear gas was used in one area because protesters did not comply with the rules,” said national police spokesman Major General Piya Uthayo.

About 100 protesters were detained while knives and bullets were confiscated, he said.

Seventeen people, including seven police officers, were treated for cuts and other injuries, officials said.

The authorities called in an extra 5,700 police after the skirmishes, but said they would allow the rally to go ahead at the Royal Plaza so long as the other protesters gathered peacefully.

The demonstrators, who included supporters of the influential “Yellow Shirt” royalist movement, called on Yingluck’s government to stand down.

“I can’t stand that they disrespect the king. I want the government to quit,” said 48-year-old farmer Namsai Jantarat from the northern province of Chiang Mai.

Yingluck on Thursday voiced fears the protesters aimed to use violence and to “overthrow an elected government and democratic rule”, in a televised address to the nation.

The government has invoked a special security law, the Internal Security Act (ISA), in three districts of the capital to cope with possible unrest.

“We will evaluate the situation daily and if it escalates we are ready to invoke emergency rule, but so far I think the ISA will be sufficient,” Thai police chief General Adul Sangsingkaew said on national television.

Thailand has been rocked by a series of sometimes violent rival street protests in recent years, although an uneasy calm had returned after national elections in 2011.

Thaksin, who made billions as a telecoms tycoon, is adored by many poor Thais for his populist policies while in power, but reviled by many in elite, military and palace circles who see him as authoritarian and a threat to the monarchy.

“This government ignores widespread disrespect of the monarchy and even supports the perpetrators. It is a puppet of Thaksin,” Pitak Siam spokesman Vachara Riddhagni told AFP ahead of the demo.

Observers say prosecutions for insulting the monarchy have surged since royalist generals toppled Thaksin in a coup in 2006 following a series of mass protests by the Yellow Shirts.

Many of those targeted with lese majeste charges are linked to the Red Shirt movement, the arch rivals of the Yellows.