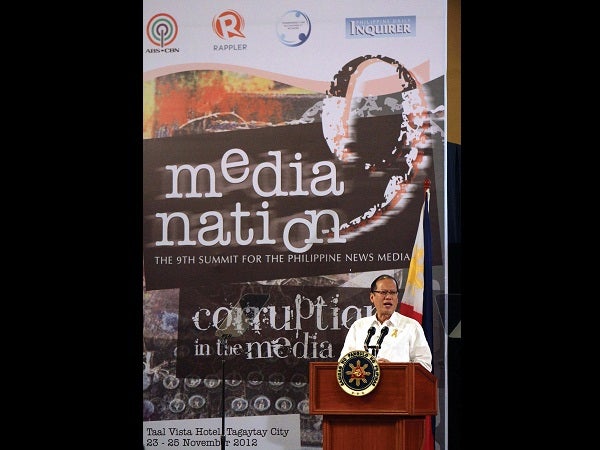 NOT COMBATIVE. President Aquino underscores the need to arrest and prosecute the people involved in the killing of journalists. He spoke at a gathering of media executives in Tagaytay City. LYN RILLON

This time, he made sure to deliver the message in a more affable manner.

No, he did not appear to be in a fighting mood, but President Benigno Aquino III took yet another opportunity on Friday to call the media’s attention to their purported “shortcomings,” but vowed “to work with you toward the advancement and protection of your profession.”

“When I talk about your profession in public, I have been forthright about the shortcomings I see, not because I enjoy criticizing, but because I believe it can help,” he said in a speech before the country’s top media executives at Taal Vista Hotel in Tagaytay City.

“My door is always open and I am here to listen to you and to work with you. I have said nothing that your own readers, viewers and listeners have not already said themselves,” Mr. Aquino said.

Mr. Aquino’s more congenial approach on Friday was in marked contrast to the combative stance he displayed in previous media events where he was an invited guest.

Last July, he berated ABS-CBN’s “TV Patrol” at its own anniversary party, for supposedly highlighting negative news. Just last week, he reiterated his preference for positive news before a gathering of the Kapisanan ng mga Brodkaster ng Pilipinas (KBP).

After delivering his speech on Friday, the President spent about an hour in a closed-door meeting with media owners and executives. Among them was Inquirer president Alexandra Prieto-Romualdez, who had directly addressed Mr. Aquino’s complaints against the media at the plenary.

“Mr. President, you have sometimes spoken of being bombarded with negativity. We feel for you,” Romualdez said in her remarks.

But she reminded Mr. Aquino that “the Constitution grants that the press is fundamentally free as it allows the press to determine negative or positive in different ways.”

“This is the diversity of opinion at the heart of democracy,” she pointed out.

No to media regulation

Mr. Aquino later insisted that he was not making a “pitch for government to take an active role in media regulation.”

“I have seen the harmful effects of state-controlled media and I am old enough to remember how, before martial law, media was held in the highest regard and considered the journal of record,” he said.

“Martial law changed that, turning a noble profession into a propaganda machine, with those in power censoring and even punishing those who spoke the truth—my father included,” he said.

The President tackled two key issues where media’s “solidarity can produce tangible outcomes.” He mentioned the need to come up with “consistent standards” in media to address conflicts of interest or determine mechanisms for redress for people who feel aggrieved by a story.

He also tackled “corruption in media,” the theme of this year’s Media Nation Summit, asking whether the benefits received by the media rank-and-file were “commensurate to the highest standards of integrity demanded of them.”

“Having seen the price our country paid to regain freedom, I believe it is incumbent on all of us to continually improve the standards to which we hold ourselves and to insist on accountability—from public officials to journalists like you,” he said.