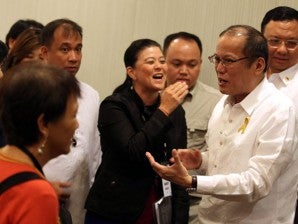 The news media industry is engaged in a deep and painful self-analysis as it tackles an issue that is not openly talked about—corruption in its ranks.

Media industry leaders meeting at the Media Nation 9 summit in Tagaytay City said it was high time the industry scrutinized and examined its actions, motives and beliefs, particularly with another election coming.

In her speech at the opening of the three-day summit on Friday, Inquirer president Sandy Prieto-Romualdez, representing the print industry, said that one of her most disheartening experiences was finding out that “someone you’ve tried your best to support and whose independence you’ve nurtured breaks that trust by selling valuable editorial real estate.”

“This betrayal weakens the institution deeply and must be addressed with great conviction,” she said.

The Philippine news media opened its ninth annual conference in Tagaytay on Friday, with more than 70 journalists from print, radio, television and Internet-based news organizations taking an honest and a critical look at media corruption, its causes and impact on national life.

Romualdez said unethical and corrupt practices should have no place in the news media, particularly in the print media, which is already faced with numerous challenges amid a rapidly changing media landscape as a result of the  “death spiral” of newspapers in Europe and North America.

She noted that from its long experience, the print media industry has come up with certain remedies for corruption such as “gift policies, correction boxes, performance reports, assessment and ombudsmen.”

Maria Ressa, chief operating officer of Rappler, an Internet-based news company, was concerned over a gray area becoming “grayer” because while the mainstream media industry has some parameters that define corrupt practices, this seemed to be justified as “making money” by new media practitioners or bloggers.

Jessica Soho, vice president for news of GMA 7 television network, said that the best way to combat corruption is doing it from within, by policing one’s ranks and strictly enforcing an internal code of ethical standards set by the individual media organization.

Maribel Buenaobra, director of programs of summit co-convenor, the Asia Foundation, said in her welcome address that the summit would then be a challenge to MN9 participants to come up with not only a frank assessment of the true state of the media industry by scrutinizing media corruption, or what she called the “white elephant” in its midst.

On Saturday, the sessions will involve discussions on “envelopmental journalism,” by Marian Roces of [email protected], and models of reform by John Nery of the Philippine Daily Inquirer, Red Batario of the Center for Community Journalism and Development, and Rappler’s Ressa.

Economist and Inquirer columnist Cielito Habito, a former socioeconomic planning secretary, will talk on “ethical journalism and its potential to impact the economy” while Vincent Tan, also of Pagbabago, will be speaking on “the bridge between transparency, ethical journalism and prosperity.”

The summit ends Sunday with a plenary and a closing keynote address by Nobel Prize Laureate Lech Walesa, the former president of Poland.

Walesa will speak on the media’s role in an unfolding democracy.