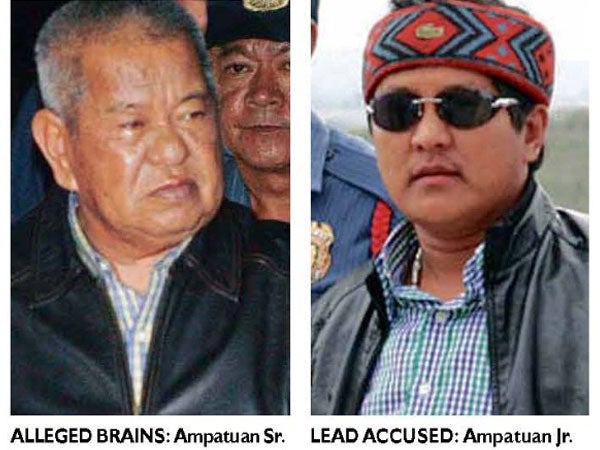 He added that one of the primary suspects still at large—Bahnarin “Datu Ban” Ampatuan—was reported last week to be hiding in one of the houses constructed by the Department of Social Welfare and Development (DSWD) in an MILF-controlled area in Maguindanao.

“There is now an alliance between the Ampatuans and the Masturas for the coming elections. They’re running under United Nationalist Alliance,” Roque said in an interview.

Roque said  his clients had also received reports that some Ampatuans wanted for the massacre were hiding in MILF-controlled areas, particularly those under the MILF’s 106th Base Command.

He said one of his informers sent him a text message on Nov. 15 saying that Bahnarin Ampatuan and his armed group were still hiding in an MILF-controlled area.

“As of this time, Datu Ban and his group are still in the DSWD-made houses located along the left side of Kabulnan River around 1 kilometer south of the municipal hall of Mamasapano,” the text message read.

“It is public knowledge in the locality that they are friendly with the MILF-BIAF 106th and 118th Base Commands and the AFP (Armed Forces of the Philippines) mechanized brigade in the area,” it added.

Roque said Interior Secretary Manuel Roxas had been informed about this development and that police had confirmed the report.

Malacañang on Thursday said  Maguindanao Gov. Esmael Mangudadatu had vouched for the character of members of the Ampatuan clan running for public office in Maguindanao under the ruling Liberal Party (LP).

Presidential spokesperson Edwin Lacierda said the candidates had been handpicked by Mangudadatu, and did not share the politics of former Gov. Andal Ampatuan Sr., one of the accused in the 2009 Maguindanao massacre.

The prospect of their election should not be a cause for worry for the residents since they eschewed the politics of the Ampatuan patriarch and shared the “reformed politics” of Mangudadatu, he said.

At least 74 members of the Ampatuan clan are reportedly running for elective posts in the midterm elections in May 2013, at least 10 of them under the LP.

“Governor Mangudadatu is a person who was victimized by the massacre and so you would listen to the person on the ground. This is local politics. And so the local politics, you consult with the local officials,” he said.