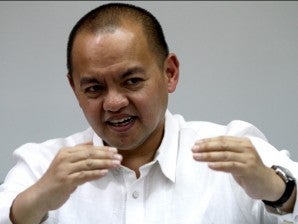 President Benigno Aquino on Wednesday plucked Mario Victor “Marvic” Leonen from the middle of crucial negotiations with Moro rebels so he could serve on  the Supreme Court and contribute to his vision of a “reformist and independent judiciary.”

In a quick turn of events, the President named Leonen the new associate justice of the high court and administered his oath in Malacañang a few hours after interviewing him yesterday.

Only 49, Leonen will serve for 21 years since 70 is the retirement age for justices.

The President’s spokesperson, Secretary Edwin Lacierda, said Leonen’s key role in the crafting and eventual signing of the framework agreement setting up an autonomous Moro homeland, Bangsamoro, was his edge over the six other nominees.

“I think his (Mr. Aquino’s) confidence in him as somebody who was able to forge a framework agreement was a consideration,” Lacierda said in a briefing, pointing out that Mr. Aquino had a glimpse of Leonen’s views and “thought process” while both worked on the framework agreement.

The President interviewed Leonen at around 1 p.m. After which, Leonen drove to the University of the Philippines campus in Diliman, Quezon City, but was called back to Malacañang, where the President broke the good news to him and later administered the oath to him, according to Lacierda, who announced the news at around 4:30 p.m.

“[Starting] today, he will be officially called justice,” Lacierda said.

Of the nominees, Leonen, a former dean of the UP College of Law, was the last to be interviewed.

The President viewed Leonen’s appointment as a legacy of the administration “consistent with his desire of a judiciary imbued with the high standards of independence, probity and integrity,” he added.

“A revitalized Supreme Court with the renewed confidence and public trust … is essential to the fulfillment of the President’s social contract with the people. A truly impartial judicial system that delivers equal justice to rich and poor,” Lacierda said.

Leonen will fill the post vacated by Associate Justice Maria  Lourdes Sereno when she was appointed Chief Justice in late August to replace Renato Corona.

Corona was impeached and fired by the Senate impeachment court in late May for nondisclosure of assets in violation of the Constitution.

“We have competent people to take over as lead negotiator for the GPH panel,” he said. Secretary Teresita “Ging” Deles, presidential adviser on the peace process, would later announce Leonen’s replacement.

Lacierda said Iqbal himself wrote the President endorsing Leonen as associate justice. The President was furnished a copy of the endorsement only Wednesday.

“The choice of the President was based on his interviews with each nominee,” Lacierda said when asked if Iqbal’s endorsement had a bearing on the President’s decision.

He said Leonen would inhibit himself from deliberations of the Supreme Court should anybody question in the court the framework agreement he signed with Iqbal.

While there appeared to be a short time between the interview and the official appointment, Lacierda said the President made a “deliberate decision” after a thorough study.

“It’s not true that the decision was made after a few minutes. The President studied who will be the next justice of the Supreme Court. In English, he was not a shoo-in. All the nominees were given a chance to be interviewed by the President,” he said.

After the interview with the President, Leonen drove to the UP campus, Lacierda said. “On the way back to the University of the Philippines, he received a call from the private office, asking him to come back to inform him of the President’s choice,” he said.

The Philippine Daily Inquirer tried but failed to reach Leonen on his mobile phone soon after his appointment was announced by Malacañang.

His close friend, UP law professor Theodore Te,  told the Inquirer by phone that Leonen had not replied to his text message as well.

Leonen’s inbox must be full of congratulatory messages, Te said.

“But knowing him, he’s with his daughter now,” Te said.

He also said Leonen would soon start cleaning up his stuff at the UP College of Law faculty room that they share.

Faculty Room No. 201, which Leonen and Te shared, was the same room that Sereno occupied when she taught at the UP College of Law years ago.

The room is lucky to one-half of the occupants, Te said, because they get appointed to the Supreme Court.

But a roommate and fellow faculty member of Sereno was stabbed to death a decade ago, Te said.

“Let’s hope that only one-half of the pattern holds true, for my sake. Or I get a roommate quick so that I get to be the half that lives,” Te said, laughing.