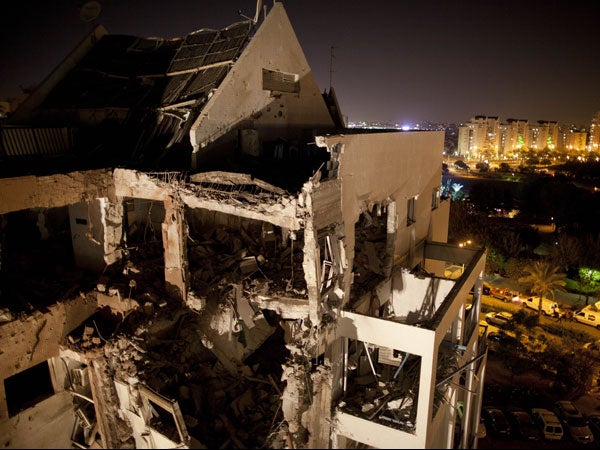 A damaged residential building is seen after it was hit by a rocket fired by militants from the Gaza Strip, in the Israeli central city of Rishon Lezion, near Tel Aviv, Tuesday, Nov. 20, 2012. AP/Oded Balilty

JERUSALEM—An Israeli soldier and a civilian were killed by Gaza rockets on Tuesday, and an Iranian-built Fajr 5 scored a direct hit on a residential building in greater Tel Aviv causing major damage, officials said.

The bloodshed occurred as Israel pressed a major aerial bombing campaign over the Hamas-run Gaza Strip in a bid to stamp out cross-border rocket fire.

The two Israelis who died on Tuesday raised to five the total number of people killed by rockets in southern Israel since the bloodshed began on November 14.

And the Fajr 5 which struck an eight-storey residential building in Rishon Letzion marked the first time a longer-range rocket fired from Gaza had struck a populated area in metropolitan Tel Aviv, police said.

Police said only two people had been lightly injured in the strike which hit Rishon LeTzion some 50 kilometers (30 miles) north of the Gaza Strip.

“There is extensive damage to an eight storey-building in Rishon Letzion which sustained a direct hit from a rocket,” police spokesman Micky Rosenfeld said, noting the damage extended “within a 200-meter (yard) radius of the building.”

He said two people had been lightly hurt in the strike, saying most of the people had managed to find safety when the air raid sirens sounded.

The attack was claimed by Hamas militants from the Ezzedine al-Qassam Brigades, who said they were responsible for the firing of the Fajr 5 rocket, and posted pictures of the building on their official Twitter feed.

Several hours later, the military announced that a soldier had been killed by rocket fire from Gaza during the morning.

In a statement, the military said 18-year-old Yosef Fartuk from the West Bank settlement of Emmanuel had been killed during the morning in the Eshkol regional council, which flanks the southern part of the Israel-Gaza border.

Shortly afterwards, a defense ministry spokesman confirmed that Alayaan Salem al-Nabari, a Bedouin civilian, had been killed by a separate rocket.

The spokesman said that Nabari had been “employed by a firm that worked for the defense ministry for many years.”

Tuesday’s deaths raise to five the number of Israelis killed by Gaza rocket fire after three other people — two men and a woman — were killed in a strike on a house in Kiryat Malachi on November 16.

Since the beginning of Operation Pillar of Defence, the army says that 1,382 rockets fired from Gaza have struck Israel, with another 389 intercepted by the Iron Dome anti-missile system.

Of that number, 138 rockets hit Israel on Tuesday, killing the two Israelis. Another 51 were intercepted by Iron Dome, the military said.

Since November 14, Israel’s emergency services said it had treated 37 people injured directly by rocket fire, including three who were seriously hurt, four moderately and 27 lightly.

And another 55 people were treated for light injuries while running for cover during alerts, a spokesman said.