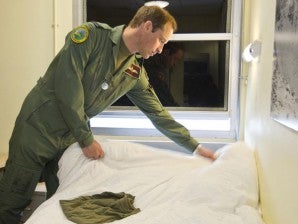 LONDON—British palace officials had to hastily remove several photographs of Prince William from the Internet on Tuesday after realising that they showed Ministry of Defense passwords in the background.

The photos, published on the website the 30-year-old prince shares with his wife Catherine, had aimed to provide a glimpse into his life as a search and rescue pilot with the Royal Air Force (RAF) — but revealed more than intended.

“Due to an administrative oversight, these photographs were not properly cleared at RAF Valley and the images showed unclassified MoD user names, passwords and computer screens on a restricted system,” a ministry spokesman said.

“The passwords and user names shown have now been reset as a precaution and we are satisfied the images do not contravene security regulations.

“All the photos have been now amended and reissued. Media organisations are kindly asked to use these images.”

The photos show the second in line to the British throne in his RAF khaki jump suit and going about every day tasks at his Welsh base, from carrying out checks on his Sea King helicopter to making a cup of tea.

Several shots in the album, entitled “A working day in the life of Flight Lieutenant Wales” in reference to the prince’s name while he is at work, show computer screens in the background of RAF operation rooms.

A spokeswoman for William’s Clarence House residence said: “The photos were taken and supplied by the RAF. Any security issues are a matter for the MoD.”

William, who will one day be head of the armed forces as Britain’s monarch, joined the RAF in 2010 and qualified as a search and rescue pilot last June.