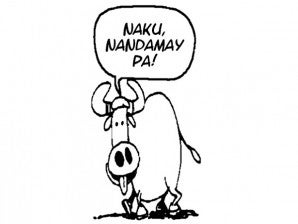 If I fall, you’re going down with me.

Senate Majority Leader Vicente Sotto III had to drag the dead in an effort to win an argument, calling attention to a news article insinuating that John F. Kennedy plagiarized an oft-quoted portion of his 1961 inaugural speech.

Sotto sent the Inquirer a text message bearing a link to the website www.dailymail.co.uk that when clicked would direct the reader to a story by Daniel Bates alleging that the slain US president lifted the quote “Ask not what the country can do for you, ask what you can do for your country” from his former headmaster in Choate, a boarding and day school in Wallingford, Connecticut.

The revelation is supposedly a detail from “Jack Kennedy: Elusive Hero,” the most recently released biography of probably the most popular chief executive in US history.

It is not difficult to guess what prompted Sotto to direct attention to the story.

The senator is accused of lifting quotes from a 1966 speech of the US president’s late brother, Sen. Robert Kennedy, translating these into Filipino and passing them off as his own in a speech delivered in September.

Sotto is facing an ethics complaint filed by a group of academicians who also accused the senator of lifting quotes from four US-based bloggers, twisting these to support his argument against the reproductive health (RH) bill and failing to properly credit them when he delivered three speeches in August and September against the measure.

At the Summit on Family Planning in the Business Sector on Thursday, former Foreign Secretary Roberto Romulo used the President Kennedy quote in his welcome remarks.

“I think it would be appropriate to give you a quote—I assure you it’s a quote, I’m not plagiarizing—from John F. Kennedy who said, ‘Ask not what the country can do for you, ask what you can do for your country,’” Romulo said.

He added, “I think this sums up what you can do for the country.”

Many interpreted Romulo’s effort to stress that he was quoting President Kennedy as an indirect attack against Sotto.

The website report said “Jack Kennedy: Elusive Hero,” penned by US author Chris Matthews, “claims the line originally came from George St. John… one of the president’s former headmasters at the Choate School in Connecticut.”

It added that Matthews “unearthed” notes written by St. John, “which suggest he had been aware of the ‘ask not’ line for many years.”

“The book also includes a reply to a questionnaire about JFK’s (Kennedy’s initials) time at the school, sent to his former classmates when he was president. One of the students wrote, ‘I boil every time I read or hear the Ask not… exhortation as being original with Jack,’” the report said.

“Time and time again we all heard [the headmaster] say that to the whole Choate family,” one source in the book was also quoted as saying.

Kennedy’s 14-minute speech, delivered at his inauguration on Capitol Hill on Jan. 20, 1961, is often included in compilations of the best speeches ever delivered.

The website report predicted that Matthews’ “extraordinary revelation is sure to raise eyebrows among historians,” once it is released.

It added that Kennedy’s speech writer Theodore C. Sorensen “has long been thought” as the source of the popular quote.