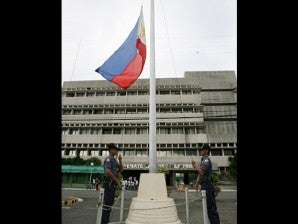 MANILA, Philippines — The mayor of a Pampanga town turned over to the Senate Wednesday morning five officers of rice cooperatives who were cited in contempt by a committee for allegedly refusing to testify in an investigation on rice smuggling in Subic.

Candaba Mayor Jerry Pelayo left potential witnesses Emily Alabado, Juanito David, Maximo Hernandez, Elpidio Mendoza and Crisanta Reyes in the custody of the Office of the Sergeant-At-Arms (OSAA) after convincing them to testify in the Senate probe.

The officers are among 20 witnesses cited in contempt two weeks back after they failed to appear in a hearing of the Senate agriculture committee that has been looking into the alleged smuggling of about P500 million worth of Indian rice in April.

Pelayo said he learned from the coop officers that they were already in Manila and poised to attend the Senate hearing but were prevailed upon by “financiers” who discouraged them from testifying.

Pelayo said some admitted that these “financiers” checked them in at the nearby Sofitel Hotel a few blocks from the Senate building and paid for their accommodation just so they would not appear in the hearing.

Senators want the coop officers to reveal the identities of these financiers on suspicion that they are using the rice cooperatives to evade import quotas and bring in rice from other countries without paying the necessary taxes.

Pelayo said he would reveal the identities of these financiers if called to appear in the Senate probe as the names were already given to him by the potential witnesses.

Senate agriculture chair Francis Pangilinan said he would discuss with Senate President Juan Ponce Enrile and other committee members “whether or not a release order is to be issued” that would in effect release the coop officers from detention.

Earlier, the Senate ordered the detention of rice coop officer Magdangal Diego Maralit for his uncooperative attitude during his testimony at the last hearing on the rice smuggling issue.

Pangilinan said that in the meantime, all six would remain under the custody of the OSAA “as our rules provide.”