Police sketches of 2 more suspects in Rodelas’ slay out 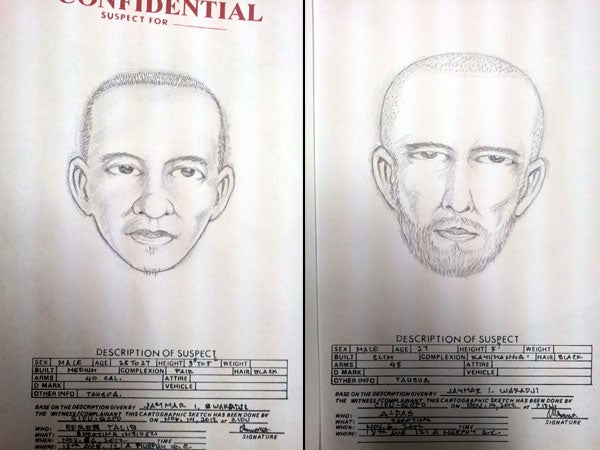 District director Chief Superintendent Mario de la Vega said the renderings were based on the descriptions given by Jaymar Waradji, one of the arrested accomplices who eventually turned witness against Althea Altamirano and Fernando Quiambao Jr.

The alleged gunman, Efren Talib, was said to be 25 to 27 years old, 5’5″ tall, of medium built, black-haired and fair-skinned.

The other man, only known as a certain Aldos, is about 27 years old, 5’7″ in height, of slim built, black-haired and brown-skinned.

The case investigator, Police Officer 2 Jogene Hernandez, said both suspects have been charged with murder at the Quezon City prosecutors office.

This was based on Waradji’s statement, which detailed the events prior to Rodelas’ abduction in Pasay City, to her captivity in a safehouse in Salaam Compound, Barangay (village) Culiat, to her murder on 18th Avenue, Cubao.

Police investigation showed that the killing was mainly motivated by a friend’s grudge. Altamirano was reportedly angry at Rodelas, her friend, for allegedly spreading rumors about her among their colleagues in the modeling industry.

Altamirano allegedly told Quiambao, her boyfriend, who then suggested teaching the victim a lesson.

Altamirano later told media after her arrest last Saturday that she never thought that the lesson would end in murder.

Waradji, who said he was a friend of Quiambao, said the suspect asked for their help in teaching Rodelas a lesson.

Meanwhile, autopsy results revealed that the victim’s genitalia had a “deep-healed laceration” which a source said could be from a previous encounter.

The results did not include spermatozoa findings as there were no swabs taken from the victim’s body, which was autopsied two days after the murder on Nov. 6.

Dela Vega declined to interpret the findings, saying it was a very technical aspect of the investigation.

Waradji earlier alleged that he heard Rodelas screaming “Huwag po, huwag po” while inside a room with Talib hours before she was killed. Aldos also expressed his intention to “use” Rodelas and stayed with her inside a room hours before her murder, Waradji said.