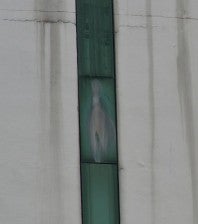 An image said to be the Virgin Mary appears on the window of a Malaysian hospital in Subang outside Kuala Lumpur on Sunday, Nov. 11, 2012. AFP PHOTO/MOHD RASFAN

KUALA LUMPUR, Malaysia—Hundreds of Catholics have gathered in prayer and worship outside a Malaysian hospital after seeing an image said to resemble the Virgin Mary on one of the windows.

Pictures of the image have gone viral among local Christians on Facebook and large crowds have gathered at the Sime Darby Medical Centre just outside Kuala Lumpur.

Those assembled Sunday maintained they can now also see an image of an adult Jesus Christ just two windows away from His mother.

Some have come from as far as Singapore, over 300 kilometers (187 miles) away, to see the image on a seventh-floor window, which they describe as a miracle.

“We believe Mary, mother of God, has a message for us, as she is looking down on us and then at a Malaysian flag. We can also see Jesus and He is also moving, they are not static,” Eunice Fernandez, who lives nearby, told AFP.

The 54-year-old housewife dismissed claims the image could be a hoax.

Sime Darby, which is primarily a plantations conglomerate, could not immediately be reached for comment. 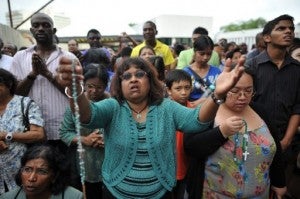 Roman Catholic devotees offer prayers in front of an image said to be of the Virgin Mary who appeared on the window of a Malaysian hospital in Subang on Nov. 11, 2012. AFP PHOTO

Father Lawrence Andrew, editor of Malaysian Catholic newsletter The Herald, told AFP the Church would need to investigate and verify the authenticity of the images and “the experiences of the witnesses.”

“It could be private revelations. We have to make sure they are not imagined but real apparitions,” he said.

Catholics make up a sizeable minority in Muslim-dominated Malaysia.