Cebu’s new ‘lechon’ with a twist 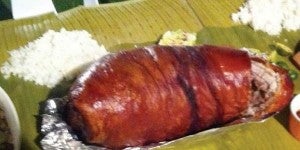 Cebu’s famous lechon has just been given a delicious twist.

Instead of an entire pig, a boneless belly is roasted to yummy perfection.

The lechon belly is also packed with herbs and spices and its red-brown skin is crispy and tasty, just like the lechon which Cebu is famous for.

It is no wonder that Cebuanos have been lining up to get a piece of this newest craze: Cebu’s Original Lechon Belly.

“We offer the best for our customers and I don’t even need to describe it (lechon belly). The people, who are lining up, will tell you,” said Marlon Gochan, owner of Cebu’s Original Lechon Belly.

He was referring to the long line of customers in front of his outlet in Parkmall, Mandaue City, Cebu. One of them was Myrose Paderog, 20, and a resident of Barangay (village) Lahug, in Cebu City.

“It is really delicious,” she told the Philippine Daily Inquirer.

“The flavor is sealed in the meat. It’s addicting in a sense that you don’t realize that you keep on eating,” she added.

Cebu’s Original Lechon Belly is similar to the traditional Cebu lechon, which is roasted slowly over a pit of smoldering charcoal.

The only difference is that the whole boneless belly, not the entire pig, is roasted the old fashion way.

“It took us almost eight months to perfect the taste and it can’t go any better than this,” said Gochan.

Incidentally, Gochan is not a chef but comes from a landed family of entrepreneurs.

His family owns Gochan real estate corporation. They used to own the Dairy King ice cream parlor along General Maxilom Avenue, a popular ice cream joint in the 1970s and 1980s.

The idea of coming up with a lechon belly started when Gochan noticed during parties that people would consume first the belly of the lechon. So he decided to try roasting the belly because it appeared to be the favorite part of the lechon-eaters.

He would prepare his belly lechon during get-togethers with family and friends. It was always a hit.

During Gochan’s 45th birthday on August 26 last year, a friend raised the idea of making his lechon belly a business.

Gochan considered the suggestion and started conceptualizing his new business.

He put up an area in his backyard where he began to perfect the flavor of his lechon belly.

Gochan and his family were hands-on in looking for raw materials like the belly and “secret spices.” He also came up with two flavors—original and spicy.

Gochan put up his first stall at the North Bus terminal in Mandaue City and South Bus Terminal in Cebu City last February. He believed that bus passengers would be the best persons who could spread the word on his product.

“My target was the travelers because they can bring home the lechon,” he explained.

Gochan named his product Cebu’s Original Lechon Belly because his product is “originally from Cebu” and the “first lechon belly.”

At first, the Cebuanos were lukewarm to his product.

His lechon is also a little more expensive than the usual lechon:  P460 a kilo for the original flavor and P480 for spicy. The traditional lechon can be bought at P350 per kilo.

According to Gochan, lechon belly is more expensive because the raw materials, which include the belly and spices, are more costly.

He added that they also use a special process in preparing the lechon belly, which is more expensive than the usual.

“The materials and processing are expensive but lechon belly is all worth it,” he said.

“We really started from scratch because Cebuanos were at first hesitant to buy or even get a free taste of our product,” said Gochan.

To get the Cebuanos to try his lechon belly, Gochan gave free tasting of his product at the South Bus Terminal. But the commuters were hesitant.

He recalled that the people walked away, scared to taste the lechon because it might contain poison.

But Gochan didn’t give up.

“After months of perseverance, our lechon business boomed and nothing makes me happier than to see Cebuanos support a product genuinely made here in Cebu,” Gochan said.

One more outlet will be opened this November.