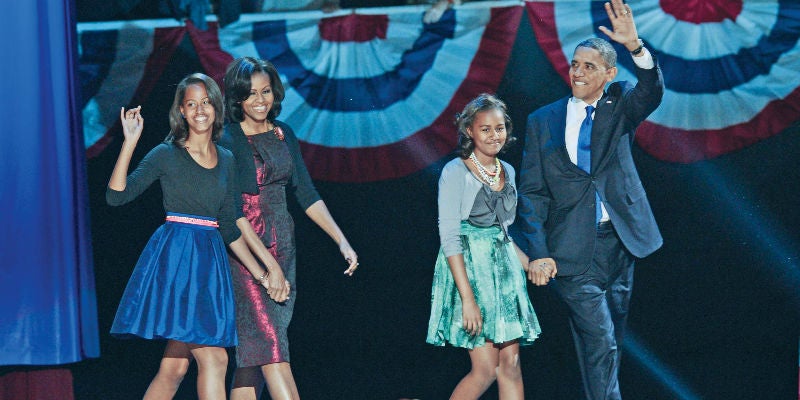 WASHINGTON—President Barack Obama swept to an emphatic reelection win over Republican Mitt Romney on Tuesday, forging new history by transcending a dragging economy and the stifling unemployment that haunted his first term.

“In this election, you, the American people, reminded us that while our road has been hard, while our journey has been long, we have picked ourselves up, we have fought our way back,” Obama said at a triumphant victory party in Chicago.

“We know in our hearts that for the United States of America the best is yet to come,” Obama said, striving for inspirational heights rarely touched in a campaign where the prophet of hope of 2008 became a conventional, brawling politician.

Chanting “Four more years!” and “USA, USA!” well-wishers danced and celebrated outside the White House late Tuesday as soon as it became clear that Obama was the winner of the election.

His supporters braved the chilly weather to wave US flags, dance and high-five strangers outside the President’s official residence to celebrate his victory.

Obama became only the second Democrat to win a second four-year White House term since World War II. The first was Bill Clinton, who served from 1993 to 2001.

“This happened because of you. Thank you,” Obama tweeted to his 22 million followers on Twitter as a flurry of battleground states, including Iowa, which nurtured his unlikely White House dreams in 2007, suddenly tipped into his column to give him a comfortable victory over the Republican challenger. “Four more years,” he said.

Romney’s aides had predicted that a late Romney wave would sweep Obama from office after a single term haunted by a sluggish recovery from the worst economic crisis since the 1930s Great Depression and high unemployment.

But a huge cheer rang out at Obama headquarters when television networks projected Obama would retain Pennsylvania and its 20 electoral votes, and the party grew wilder as they called Wisconsin and Michigan.

The 44th US president and the first African-American to claim the Oval Office was returned to power after a joyless election that appears to have deepened, rather than healed, his nation’s political divides.

Romney, deflated and exhausted, offered Obama a classy tribute, as he appeared before dejected supporters in Boston, moments after phoning the US leader to formally concede and to congratulate his team.

“I wish all of them well but particularly the President, the first lady and their daughters,” Romney said.

“This is a time of great challenges for America and I pray that the President will be successful in guiding our nation,” he said.

Obama repaid the compliment in his speech, saying the Romney family “had chosen to give back to America through public service and that is the legacy that we honor and applaud tonight.”

And in an intriguing aside, the president said he looked forward to sitting down with his former foe to find if they could find common ground to work together.

Once the euphoria fades, Obama will face a tough task enacting his second term agenda, after Republicans, who thwarted him repeatedly in his first term, retained control of the House of Representatives.

Democrats kept the Senate but fell short of the 60-vote supermajority needed to pass major legislation over Republican blocking tactics.

With a clutch of swing states including Florida still to be declared, Obama already had 303 electoral votes, well over the 270 needed to win the White House.

Obama paved the way to victory with a staunch defense of Democratic bastions in Pennsylvania, Wisconsin and Michigan, at which Romney had taken a last-minute run when he saw more conventional paths to victory blocked. 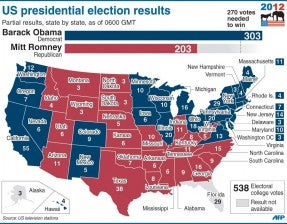 He also locked in swing states, Virginia, which he became the first Democrat to win since 1964 four years ago, Nevada, Ohio, New Hampshire, Colorado and Iowa, crushing Romney’s slim hopes of a viable path to victory.

Romney could only wrestle Indiana and North Carolina from Obama’s 2008 account.

Obama and Romney were neck-and-neck in Florida, but the final results from the Sunshine State were not expected until Wednesday (Thursday in Manila).

The win in Iowa was especially sweet for Obama, as the heartland state nurtured his presidential dreams way back in 2007 and a tear rolled down his cheek as he held his last ever campaign rally there late Monday.

His victory in Ohio represents a delayed repayment for his gutsy call in 2009 to mandate a federal bailout of the auto industry, on which one in eight jobs in the state depend and which Romney opposed.

Obama, no longer a prophet of hope and change, won reelection with a fiercely negative campaign, as he branded Romney, a former multimillionaire corporate turnaround wizard as indifferent to the woes of the middle class.

Prior to Obama’s victory, no president in 70 years had won reelection with the unemployment rate above 7.4 percent. Although the economy has created more than 5 million jobs since the Great Recession, the rate is now 7.9 percent.

Exit polls showed that though only 39 percent of people believed that the economy was improving, around half of Americans blamed former Republican President George W. Bush for the tenuous situation, and not Obama.

Obama’s victory was a complete vindication for a campaign team that had predicted a close, but winnable election, despite the painful after effects of the deepest economic crisis since the 1930s Great Depression.

Obama ran for reelection on a platform of offering a “fair shot” to the middle class, of fulfilling his pledge to end the war in Iraq, killing Osama bin Laden, and of building a clean energy economy.

Remarkably, his coalition of Hispanic, African-American and young voters, defied expectations and turned out in similar numbers to those of his euphoric change-fueled campaign in 2008, shocking Romney’s team.

Latino voters in particular helped Obama to victory in the desert state of Nevada, and in the Rocky Mountains state of Colorado, US television networks projected.

Republicans had insisted right up to election day that Obama’s army, disaffected by busted expectations for his first term, would stay home, and had predicted instead a late Republican wave that would elevate Romney.

Now, Obama will get the chance to protect his historic reforms of health care and Wall Street and may have the chance to shape the Supreme Court for a generation, with several vacancies on the court expected to arise.

Obama will also likely look abroad as he builds his legacy, but will face an immediate challenge early in 2013 and a possible decision whether to use military force to thwart Iran’s nuclear program.

More immediately, at home, Obama will face a swift showdown with Republicans on Capitol Hill, on the so-called fiscal cliff involving the expiry of Bush-era tax cuts and a need to raise the US debt ceiling.

Ruinous budget cuts designed to trim the ballooning deficit, which could tip the economy into recession, are also about to come due, unless Obama can reach a deal with Republicans, who have opposed him tooth and nail for four years.

Obama may have been helped at the 11th hour when Superstorm “Sandy” roared ashore on Oct. 30, killing more than 100 Americans, but giving Obama the chance to publicly pull the levers of government.

Outside the White House late Tuesday, union activist Nicole Arow, 28, said she was “thrilled and relieved” to learn about Obama’s victory, adding: “Joy. That’s what I feel.”

Those who arrived at the White House shortly after US television networks called the race for Obama appeared to be college students in their 20s, but the crowd quickly diversified as parents with young children joined the party.

“I feel that my hope is renewed and I’m ready to fight the good fight,” he said. “It’s a great day to be an American.”