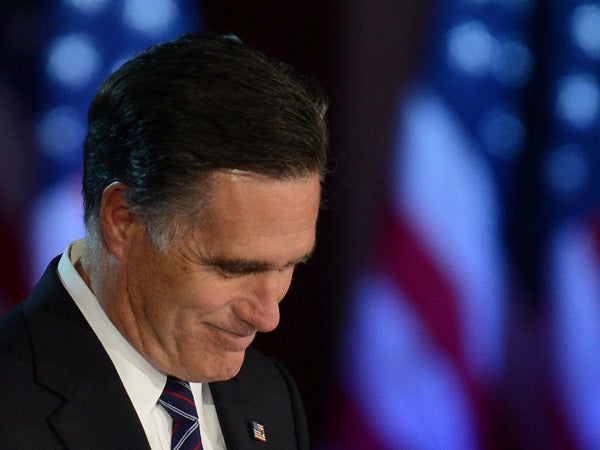 US Republican presidential candidate Mitt Romney arrives on stage to concede the election to President Barack Obama on November 7, 2012 in Boston. Obama swept to re-election, forging history again by transcending a slow economic recovery and the high unemployment which haunted his first term to beat Romney. AFP/DON EMMERT

BOSTON, Massachusetts — Republican challenger Mitt Romney conceded defeat in the US election early Wednesday, telling supporters that he had called President Barack Obama to congratulate him on his victory.

“His supporters and his campaign also deserve congratulations,” Romney said in a brief address at his election watch party in Boston.

“I wish all of them well but particularly the president, the first lady and their daughters.”

It was a quick, underwhelming end to an 18-month campaign that began on a farm in New Hampshire, survived brutal Republican infighting during the party primaries early this year and a barrage of negative attack ads by the Obama camp, and rose to give the incumbent a serious scare weeks before the election.

Romney was neck-and-neck with the president for a considerable part of the campaign, but despite repeated trips to swing states like Colorado, Ohio, Florida, and Virginia, Obama held on to leads in the battlegrounds, which eventually became the challenger’s undoing.

As of 0700 GMT Wednesday, Obama won 303 electoral votes, compared to 203 for Romney, with only key battleground of Florida outstanding. Two hundred seventy are needed to with the White House.

“This election is over, but our principles endure,” said Romney, a former governor of Massachusetts who said he believed smaller government, limited regulations and lower taxes could create more jobs and bring a speedier economic recovery.

“I so wish that I had been able to fulfill your hopes to lead the country in a different direction, but the nation chose another leader, and so Ann and I join with you to earnestly pray for him and this great nation,” Romney said to cheers and applause.

Several members of Romney’s senior staff stood next to the stage, many stone-faced and somber, as the Republican nominee addressed his supporters.

Romney returned to a theme that he began injecting into his stump speeches in the closing two weeks of the campaign: the need for greater bipartisanship in Washington.

“At a time like this, we can’t risk partisan bickering and posturing,” he said.

“Our leaders have to reach across the aisle to do the people’s work and we citizens have to rise to the occasion.”

Romney also thanked his running mate, Congressman Paul Ryan of Wisconsin, as well as wife Ann Romney, his tireless surrogate on the campaign trail whom he called “the love of my life.”

“She would have been a wonderful first lady,” he mused, to loud applause.

Romney’s comments were brief and basic, and it was not immediately clear if he had written a concession speech.

Earlier in the day, when asked by reporters on his campaign plane whether he had two speeches ready to go for Tuesday night, he said he was confident of defeating Obama and had penned an 1,118-word victory speech.

After stepping back from the podium, Romney turned around and kissed his wife, gave Ryan a handshake and a hug, and then stepped into the embrace of his family.

Read Next
Suarez seeks probe into NPO’s contract to private firm
EDITORS' PICK
Metro Manila posts lowest temperature yet this ‘amihan’ season at 19°C
DOH: 28,471 new COVID-19 cases in PH; active cases now 284,458
Gear up and get ready to play with Yamaha Mio Gear
Acer starts the year off strong with the Aspire Vero National Geographic Edition
On Day 2 of implementation, gov’t says workers now exempt from ‘no vax, no ride’ policy
Over 3 Million worth of prizes to be won at Smart Padala’s SENDali Manalo Promo!
MOST READ
Cold-case investigation names surprise suspect in Anne Frank’s betrayal
Emma Stone calls Andrew Garfield a ‘jerk’ after he ‘lied’ about his ‘Spider-Man: No Way Home’ appearance
Derek Ramsay on being married to Ellen Adarna: ‘Gumaan ‘yung mundo ko’
Czech anti-vax singer dies after deliberate infection
Don't miss out on the latest news and information.