Obama has edge in polls

US president, Romney in do-or-die dash to the finish
Agence France-Presse, Associated Press / 12:07 AM November 06, 2012 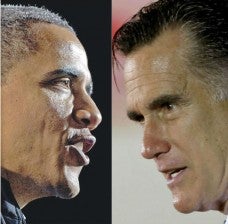 WASHINGTON—US President Barack Obama and Republican challenger Mitt Romney made a frenetic dash to a series of crucial swing states on Monday, delivering their final arguments to voters on the last day of an extraordinarily close race for the White House.

After a long, bitter and expensive campaign, national polls show Obama and Romney are essentially deadlocked ahead of Tuesday’s election, although Obama has a slight advantage in the nine battleground states that will decide the winner—Ohio, Florida, Virginia, North Carolina, Colorado, Nevada, Wisconsin, Iowa and New Hampshire.

The race was so close that the final national NBC/Wall Street Journal Poll, released on Sunday, showed Obama getting the support of 48 percent of likely voters, with Romney receiving 47 percent. The poll had a margin of error of 2.55 percentage points.

The final national poll from Pew Research Center found Obama with a 3-point edge over Romney, 48 percent to 45 percent among likely voters, an improved showing that indicates the president may have benefited from his handling of the response to Superstorm “Sandy.” The Pew poll had a margin of error of 2.2 percentage points.

If the election were held now, an Associated Press analysis found that Obama would be all but assured of 249 electoral votes, by carrying 20 states that are solidly Democratic or leaning his way—Iowa, Nevada and Pennsylvania among them— and the District of Columbia.

Romney would lay claim to 206, from probable victories in 24 states that are strong Republican turf or tilt toward the Republicans, including North Carolina.

Up for grabs are 83 electoral votes spread across Colorado, Florida, Ohio, New Hampshire, Virginia and Wisconsin. Of those, Republicans and Democrats alike say Obama seems in slightly better shape than Romney in Ohio and Wisconsin, while Romney appears to be performing slightly better than Obama or has pulled even in Florida and Virginia.

Obama and Romney hunted for last-minute support on Sunday across battleground states, while their parties faced off in the first of what could be a growing number of legal disputes over presidential ballots and how they are counted.

In Florida, the state’s Democratic Party filed a lawsuit on Sunday morning that would force the Republican-led government to extend early voting in South Florida after complaints about extremely long lines on Saturday that prevented some people from casting their ballots. The Republican-controlled state legislature cut back early voting, which ended on Saturday, from 14 days to eight. 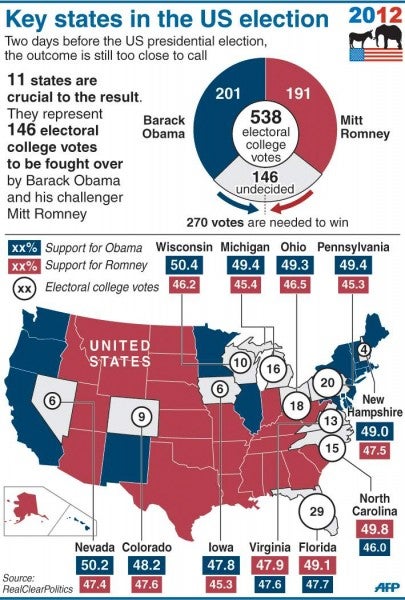 The lawsuit was followed by a chaotic day in the Democratic stronghold of Miami-Dade County, which opened one of its election offices for two hours to accept completed absentee ballots, then shut down only to reopen Sunday afternoon.

Three counties said they would open again on Monday, but Democratic lawyers will continue to argue in court that in-person early voting should continue through Tuesday in Broward County.

In Ohio, Republican election officials will go to court on Monday to defend an 11th-hour directive to local election officials that critics charge could invalidate thousands of provisional ballots by forcing voters to attest to the type of identification they provide.

Together, the preelection legal skirmishes were a potential preview of the clashes that could emerge in as many as a half-dozen swing states with Tuesday’s voting. The closeness of the races in those states has intensified the stakes of voter turnout, smooth operations at polling places, ballot problems and recounts.

Obama plans to visit three of the swing states on Monday and Romney will travel to four to plead for support in a fierce White House campaign that focused primarily on the lagging economy but at times turned intensely personal.

The election’s outcome will impact a variety of domestic and foreign policy issues, from the looming “fiscal cliff” of spending cuts and tax increases that could kick in at the end of the year to questions about how to handle illegal immigration or the thorny challenge of Iran’s nuclear ambitions.

The balance of power in Congress will also be at stake on Tuesday, with Obama’s Democrats now expected to narrowly hold their Senate majority and Romney’s Republicans favored to retain control of the House of Representatives.

In a race where the two candidates and their party allies raised a combined $2 billion, the most in US history, both sides have pounded the heavily contested battleground states with an unprecedented barrage of ads.

The close margins in state and national polls suggested the possibility of a cliffhanger that could be decided by which side has the best turnout operation and gets its voters to the polls.

In the final days, both Obama and Romney focused on firing up core supporters and wooing the last few undecided voters in battleground states.

Romney reached out to dissatisfied Obama supporters from 2008, calling himself the candidate of change and ridiculing Obama’s failure to live up to his campaign promises.

“He promised to do so very much but frankly he fell so very short,” Romney said at a rally in Cleveland, Ohio, on Sunday.

Obama, citing improving economic reports on the pace of hiring, argued in the final stretch that he had made progress in turning around the economy but needed a second White House term to finish the job.

“This is a choice between two different versions of America,” Obama said in Cincinnati, Ohio.

And he appealed to the crowd to choose his version. “I need you, Ohio,” he admitted to a 20,000-strong Cincinnati crowd, in the state for which he and Romney are fighting tooth and nail.

Ohio went with Obama in 2008, and no Republican candidate has won the White House without carrying Ohio.

Obama has kept a small but steady lead in the polls over Romney in Ohio for months. He has been buoyed in Ohio by his support for a federal bailout of the auto industry, where one in every eight jobs is tied to car manufacturing, and by a strong state economy with an unemployment rate lower than the 7.9-percent national rate.

That has undercut Romney’s frequent criticism of Obama’s economic leadership, which has focused on the persistently high jobless rate and what Romney calls Obama’s big spending efforts to expand government power. The former Massachusetts governor has few paths to victory if he cannot win Ohio.

After Ohio, Obama will close his campaign on Monday with a final blitz across Wisconsin and Iowa, two other Midwestern states that, barring surprises elsewhere, would be enough to get him more than the

Polls show his slim leads in all three states are holding.

His final stop on Monday night will be in Iowa, the state that propelled him on the path to the White House in 2008 with a victory in its first-in-the-nation caucus.

Romney will visit his must-win states of Florida and Virginia—where polls show he is slightly ahead or tied—along with Ohio before concluding in New Hampshire, where he launched his presidential run last year.

After a grueling 18-month battle, the candidates are closing their campaign for the world’s top job.

Obama and Romney have attended hundreds of rallies, fundraisers and town halls, spent literally billions on attack ads, ground games and get-out-the-vote efforts, and squared off in three intense debates.

Their running mates—Vice President Joe Biden and Republican Rep. Paul Ryan—have laid out the rationales for their bosses’ apsirations; First Lady Michelle Obama, Romney’s wife, Ann, and countless surrogates on both sides have made the case.