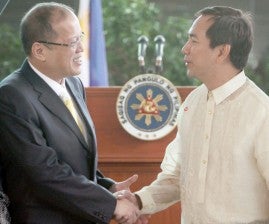 President Benigno Aquino on Sunday presided over the changing of the guard at the Department of Energy (DOE).

The President separately administered the oaths of office to newly appointed Energy Secretary Carlos Jericho Petilla and his predecessor, Jose Rene Almendras, who was named secretary to the Cabinet.

The ceremonies took place at Terminal 2 of Ninoy Aquino International Airport at noon, an hour before the President departed for Vientiane, the Laotian capital, for the two-day Asia-Europe Meeting (Asem).

Almendras, a close friend of Mr. Aquino, had held the energy portfolio from Day One of the Aquino presidency.

In a brief chat with reporters before boarding the presidential flight to Laos, Almendras denied that his latest Cabinet posting was yet another bureaucratic layer, which could potentially overlap with the functions of Executive Secretary Paquito Ochoa.

Almendras, however, pointed to the necessity of a Cabinet-rank Palace official overseeing the ins and outs of government, including the affairs of the 20 departments, called line agencies, under the executive branch.

“There is a need for coordination among the agencies,” he said.

While Ochoa has been under the radar, distancing himself from the media most of the time, Almendras has traveled with the President here and abroad.

Almendras cited his previous function in explaining his new job.

“Secretaries like me before was so focused on just energy (concerns). But there are initiatives that the President (likes to embark on), isn’t it? And, in that case, he wants (that) somebody is the one following through,” Almendras said.

But coordinating the work of the different line agencies has always been the turf of the executive secretary, dubbed the “Little President” because of the enormous powers that come with the office.

As the President’s top political lieutenant, the executive secretary speaks the mind of the President and is the sounding board of the secretaries.

The executive secretary likewise signs presidential appointments, memorandums, executive orders and other presidential issuances; and meets behind closed doors with senators and representatives, on the behest of the President, to advance his political and legislative agenda.

During the Arroyo administration, the executive secretary even signed contracts not exceeding P50 million.

“The Cabinet secretary has been there for—what?—since 1987. So it’s not a new position. It has always been there designated,” Almendras said.

“So there is also such a thing as a Cabinet assistant system. This was started during the time of President (Corazon) Aquino.”

The post was last held by Ricardo Saludo before he was appointed chairman of the Civil Service Commission in the waning days of the Arroyo presidency.

“It’s a whole structure on how somebody below the secretary level is actually working together with the others to create a more dynamic process,” Almendras said.

Almendras disclosed that his position would not fall under any particular department or office, but stopped short of saying whether he would be under Ochoa, or directly reporting to Mr. Aquino.

“So in an org(anizational) chart, (the Cabinet secretary) is not part of the linear … it’s not aligned (with any department),” he said.

Almendras said “no” when asked by the Inquirer whether he would “take some functions” of either the PMS headed by Julia Abad or the executive secretary.

But there is one thing that the public should expect from the secretary to the Cabinet.

“You will not even see me. We are (doing) a staff function. We completely disappear into the bureaucracy,” Almendras said. “He assigns me to do certain things and that’s the role that we’re supposed to play.”

Petilla will officially assume his post on Monday, after a turnover ceremony at the Leyte capitol, where Vice Governor Ma. Mimiette Bagulaya will serve as acting governor until elections are held in 2013.

What made the three-term governor accept the Cabinet post?

“We have a President who is actually … very sincere. He really wants changes in the way we do things (and) bring us back to where we were before. In other words, you know, improve the country, make us competitive, and he’s sacrificing. You can see his sincerity,” Petilla said.

He said that all secretaries were actually sacrificing in accepting Cabinet assignments.

“And for me, if the job was offered and it was offered, the least I can do is actually help the President, help the country and help all the people sacrificing here. And that’s the main reason why I actually accepted the post,” he said.

“There are many challenges, many problems, but I think (they’re) nothing new,” Petilla said. “I’m taking off from where Secretary Almendras left. I am not going to reinvent anything.”

His priority is “to get a grip of the entire situation of the power industry and that includes, of course, the power generators, the cooperatives and transmission lines that we have.”

“(I will) look at the 20-year (energy) plan that has been started already. It hasn’t been released yet but we have to look at it and see where we are going,” he said.

Asked about the most pressing problem in the energy sector, Petilla said: “It’s a combination. It’s a push and pull.”

He explained at length the interrelated relationship between power generators, electric cooperatives, the National Power Corp., and the Power Sector Assets and Liabilities Management Corp.

He said the country had ample power supply in Luzon and Mindanao.

“(But) we’re treading on thin line in terms of the supply power as compared to the demand … When I say it’s thin line (it means that) if all of a sudden we increase our consumption by 10 percent because we have industrialization, then we have a problem. But that’s taking everything into consideration,” he said.

On the Philippines  having the higher power rates in Asia, Petilla wanted “to get a grip” of the extent of the problem first before proposing a solution.