Sagada lights up fires to warm their departed 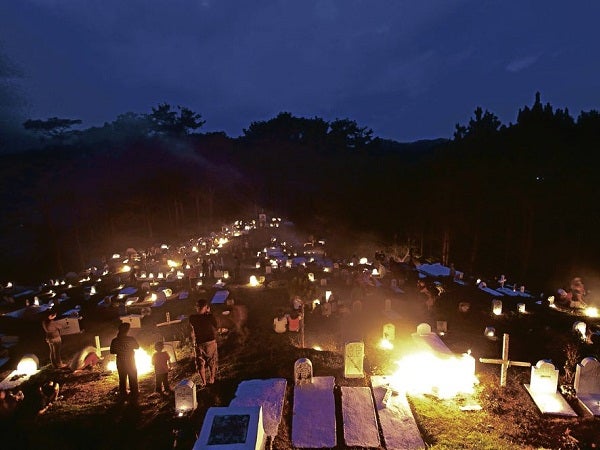 FIRE FOR THE DEAD. The people of Sagada, Mountain Province, gather in a cemetery for “Panag-apoy” (to make fire) at dusk on Thursday, All Saints’ Day. Combining Filipino practices with Anglican church rites, the ritual is intended to give warmth to the souls of the departed. RICHARD BALONGLONG/INQUIRER NORTHERN LUZON

Ben Tumapang, 62, arrived at the cemetery with a sack full of saleng (pine twigs), which he ignited to light the graves of his in-laws and his son, a soldier killed by communist rebels in the 1980s.

“This [blazing fire] is to provide them light and warmth. Their souls are here with us, so we give them light,” Tumapang said.

Igorot culture believes society must be bound to the souls of their ancestors, according to studies.

Keeping the souls comfortable is key to the practice called Panag-apoy (to light a fire), which clans continue to practice. Even families who have migrated to other countries occasionally return to take part in the tradition, which is a mix of Mt. Province mythology and Anglican Church rites.

Before heading for Sagada Cemetery, the town folk proceed to the Church of Saint Mary the Virgin for Mass and for the priest to bless their bundles of saleng.

At the Mass, the families provide the priest with lists of their departed kin. The priest reads out these names, which take him hours.

After the Mass, the town folk troop to the cemetery before sunset and simultaneously light their saleng, which are set up beside their family tombs.

Former Sagada Mayor Thomas Killip said Panag-apoy started at the start of the 1900s, influenced by the teachings of American missionaries during the American colonial period.

One of the first Anglican priests to settle in Sagada,  Rev. John Staunton, who arrived in 1904, administered the first baptism and officiated over the first Christian funerals there, Killip said.

Instead of candles, the indigenous Filipino community wielded saleng torches. “We use fire during traditional burials. It is someone wielding a torch who goes ahead into the caves when someone is to be buried. At the turn of the 20th century, saleng was used because there were no available candles,” Killip said.

“There are families who come home here to light the saleng. But for those who can’t make it, we light the wood for them so the spirits of the departed will not complain,” he said. Richard Balonglong, with a report from Desiree Caluza, Inquirer Northern Luzon