2 suspects in murder of UST alumna nabbed in Cavite 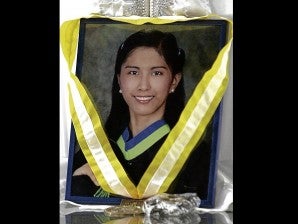 Police on Friday arrested two suspects in the murder of a 20-year-old woman in Bacoor City, Cavite.

Police said Magalang was on her way home from work at SM Mall of Asia when she was held up by the suspects in Bacoor.

A witness last saw Magalang boarding Roel’s tricycle  around 11 p.m. on Oct. 30. Bulalacao said the suspects both admitted to the crime. He said Rollyn held the victim with a screw driver. The suspects then took her to a farm in Molino 7.

A farmer found Magalang’s body the next morning inside a hut in the farm. Police said she had 49 stab wounds in different parts of her body and her face crushed with a hollow block. The victim’s hands were tied with a plastic straw and her underwear pulled down, although the autopsy report has yet to confirm if she was raped.

Police found the screw driver used in the murder from the scene and the victim’s bag in a nearby creek.

Bulalacao said the suspects were charged with the complex crimes of robbery with homicide, which are nonbailable and carry the maximum penalty of life imprisonment. Maricar Cinco, Inquirer Southern Luzon