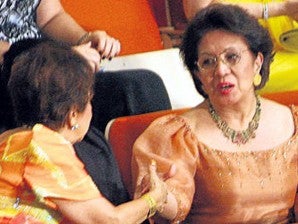 MORALES: I have never met the President before. RAFFY LERMA

President Aquino on Monday named retired Supreme Court Associate Justice Conchita Carpio-Morales as the new Ombudsman, boosting his administration’s drive to file cases against “the corrupt and their accomplices.”

Morales’ possible appointment as Ombudsman was earlier opposed by former President Gloria Macapagal-Arroyo, a subject of several corruption cases being built up by prosecutors.

Mr. Aquino announced Morales’ appointment during his second State of the Nation Address (Sona) in the joint session of the Senate and the House of Representatives, drawing the most applause from the audience.

“When the new Ombudsman, former Supreme Court Justice Conchita Carpio-Morales, takes office, we will have an honest-to-goodness anticorruption office, not one that condones the corruption and abuses in government,” the President said.

He was referring to former Ombudsman Merceditas Gutierrez, who resigned in April days before her impeachment trial at the Senate was to start.

Before Gutierrez resigned, President Aquino assailed her inability to file cases against officials of the past administration.

With Morales at the helm of the Office of the Ombudsman, Mr. Aquino said he expected “that this year, we will have filed our first major case against the corrupt and their accomplices.”

“And these will be real cases, with strong evidence and clear testimonies, which will lead to the punishment of the guilty,” he said.

No case if no evidence

Morales, 70, said she was “honored” by the appointment, but made it clear that she would not be pressured—even by Mr. Aquino—into filing cases against Arroyo unless evidence warranted it.

Asked how she would go about prosecuting Arroyo, she said: “I have always said we go by evidence. If there is probable cause, then we hale her to court. If there is none, we might as well dismiss the case.”

Morales said she learned about her appointment only at around 3 p.m. or about an hour before the President delivered his Sona.

Before the formal announcement, she said she had been getting text messages speculating on her possible appointment. “But I was invited (to the Sona),” she said.

Ramos went out of his way to congratulate Morales. “It could not have gone to a better person with great wisdom and legal expertise. It’s a very, very delicate job but … we should always remember the right path,” he told Morales, shaking her hand.

Morales is said to be a critic of former President Arroyo, but Justice Secretary Leila de Lima downplayed the possibility that it was a factor in her appointment.

Mr. Aquino earlier vowed to prosecute Arroyo and other officials allegedly involved in graft and corruption during her nine-year term.

Sen. Miriam Defensor-Santiago has expressed reservations about Morales’ ability to handle cases at the Office of the Ombudsman because of her age.

“She’s the best judge of herself,” the senator said. “So many cases are filed at the Ombudsman and you have to have enough energy.”

Told about Santiago’s observation, Morales said: “She’s entitled to her own opinion. I was wondering if they could measure my energy by my age. I told the JBC, which interviewed me, that if I was that old, the wellness results belied those charges against me.”

Now that she had been formally appointed, Morales said she would “see to it that we will have a graft-free government.” It was Morales who administered Mr. Aquino’s oath of office on June 30 last year. Her appointment came more than a week before Aug. 4, the deadline for the position to be filled up. With a report from Cynthia D. Balana