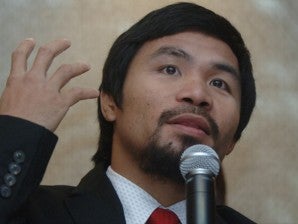 MANILA, Philippines—He may be deep in training in the United States for his fourth bout with Mexican archrival Juan Manuel Marquez in December. But Manny Pacquiao, the congressman, is waging another battle at home.

Saranggani Representative Emmanuel Pacquiao wants to limit the number of times that the President could reappoint a nominee who has been repeatedly bypassed by the powerful Commission on Appointments.

“There is a need to limit this presidential prerogative to prevent abuse,” the first-term congressman said in the explanatory note of House Bill No. 2773.

After a nominee has been twice bypassed by the CA, the appointee can no longer be “re-nominated or reappointed by the President for the same office,” says Pacquiao’s proposed “Non-Renewal of Nominations or Appointments Act.”

At present, there is no limit as to how many times the President could keep a bypassed official, a practice that purportedly dilutes the powers of the CA, a body composed of members of the Senate and the House of Representatives.

When Congress is in session, a presidential appointment is considered “regular.” One that is made when lawmakers are on break is labeled “ad interim.”

Pacquiao’s bill imposes a six-month jail term or a maximum fine of P100,000 on “the Executive Secretary or any member of Cabinet and any other official working with the Office of the President who knowingly transmits the re-nomination or reappointment papers to the re-nominee or reappointee.”

A nominee who “knowingly accepts” the reappointment could be imprisoned for three months on top of a P50,000 fine. Not only that.

“If, for any reason, such a nominee or appointee hangs on to the office to which the President might have nominated or appointed him or her, the said appointee shall not be entitled to the payment of salaries, emoluments, per diems and other benefits pertaining to the office concerned,” Pacquiao said.

The CA has also not yet deliberated on the appointments of Commissioner Heidi Mendoza of the Commission on Audit and Commissioner Robert Martinez of the Civil Service Commission.

CA members came under fire in August for failing to confirm the appointment of the late Interior Secretary Jesse Robredo. The appointment was supposedly blocked by Camarines Sur Representative Luis Villafuerte, who  denied the allegation.