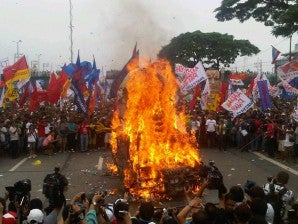 AQUINO IN FLAMES. Militants burn the effigy of President Benigno Aquino III during a protest along Commonwealth Avenue shortly before the Aquino delivers his speech I Congress Monday, July 25, 2011.

AQUINO IN FLAMES. Militants burn an effigy of President Benigno Aquino III ahead of his State of the Nation Address in Congress Monday, July 25, 2011. Video taken by Noy Morcoso and edited by Cathy Miranda

MANILA, Philippines – Militants burned an effigy of President Benigno Aquino III, an hour before he was to deliver his State of the Nation Address in Congress Monday.

The head was on top of a US military vehicle, which symbolized the current administration’s continued dependence on the US government.

The vehicle also had a sign, similar to what you would find on the windshield of a public bus or jeepney, which said “Impyerno, Ilalim [Hell, Under]”.

Members of militant groups danced around the burning effigy while waving flags and banners at the St. Peter’s Church along Commonwealth Avenue in Quezon City.

The militants expressed their disappointment because Aquino failed to accomplish anything during his first year in office, chanting, “Noynoy Aquino, walang pagbabago (Noynoy Aquino, no change].”

They asked why, despite the exposes against his predecessor Gloria Macapagal-Arroyo, no one involved has been put in jail.

Some 5000 joint forces of the PNP, Armed Forces, Metropolitan Manila Development Authority (MMDA) and Bureau of Fire Protection were deployed in the area to ensure peace and order.