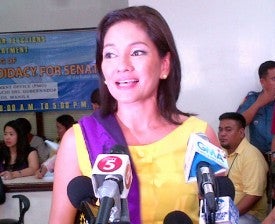 Akbayan’s coalition with the Aquino administration is not a capitulation of its objectives but a sign of its maturity as a party, its chairperson, Risa Hontiveros, said at a dinner-meeting with Philippine Daily Inquirer editors and reporters on Thursday. Matikas Santos/INQUIRER.net

A party-list group that has members now entrenched in the executive department says it remains committed to working for reforms and pushing for policies for the benefit of sectors such as farmers, laborers, women and informal settlers.

The 14-year-old Akbayan believes it has every right to remain in the party-list system, despite what critics in “the other Left” are saying about its more powerful stature given its coalition with President Aquino’s political party and access to Malacañang.

Its members who are in the executive are Commission on Human Rights Chairman Loretta Rosales, National Anti-Poverty Commission Chair Joel Rocamora, Presidential Adviser on Political Affairs Ronald Llamas and his deputy, Ibarra Gutierrez III. In addition, Akbayan has two members in the House of Representatives.

Akbayan’s coalition with the Aquino administration is not a capitulation of its objectives but a sign of its maturity as a party, its chairperson, Risa Hontiveros, said at a dinner-meeting with Philippine Daily Inquirer editors and reporters on Thursday.

Within the executive department, Akbayan continues to push for advocacies and policies that will help the sectors it represents, she said.

Critics, led by Anakbayan, said Akbayan could not claim to represent the marginalized since it is led by people allied with the administration. The two groups come from different factions of the Left.

Akbayan is also seeking to further broaden its reach in the government by aiming to put Hontiveros in the halls of the Senate.

Hontiveros, a widow and mother of four, is making her second attempt at joining the Senate, after landing just outside the Magic 12 in the 2010 senatorial election.

She is part of the administration coalition led by the President’s Liberal Party. Akbayan has a partnership with Mr. Aquino that dates back to 2009.

These sectors’ agenda are still not front and center in government institutions, which is why there is the need for more people in government fighting for their cause, said Hontiveros, a former member of the House of Representatives.

Akbayan said the marginalized and underrepresented should be represented at all levels of government.

Gutierrez, Akbayan’s spokesperson, said the group’s bashers seemed to have confused representation of the marginalized, which is what is required under the party-list law, with marginalization of the organization.

Gutierrez said Akbayan had complied with requirements in the law to participate in the party-list elections.

Under the party-list law, those that can participate in the polls are sectoral and regional groups, and political parties. They also have to represent the disadvantaged sectors.

Akbayan, a political party registered to participate in  party-list elections, represents multiple and marginalized sectors, where most of its members come from, Gutierrez said.

Seeking the disqualification of Akbayan is like saying that the sectors it represents are no longer marginalized, he added.

The group’s track record speaks for itself, Hontiveros said.

Akbayan has championed several laws and bills that help the downtrodden, such as the extension of the comprehensive agrarian reform program and the reproductive health measure, she said.

Gutierrez pointed out that no formal petition was filed against Akbayan in the Commission on Elections (Comelec), and what Anakbayan sent to the Comelec was just a letter questioning Akbayan’s status. But the Comelec was conducting a general review of all party-list groups anyway, he said.

The Comelec is purging the party-list system of bogus groups led by the wealthy and influential who claim to champion the disadvantaged.

Akbayan’s case was different from that of Ako Bicol, which the  poll body disqualified in the 2013 elections, according to Gutierrez.

He said Ako Bicol was found to have failed to establish that it was representing a marginalized sector and had not filed a petition to participate in the party-list polls.

There is also a world of difference between Akbayan and the party-list groups that President Gloria Macapagal-Arroyo had fielded and filled with her officials, Hontiveros said.

Hontiveros said these Arroyo groups were newly created and funded by the previous administration to join the party-list system. By contrast, Akbayan has long been joining the polls and receives no funding from the Aquino administration, she said.

Akbayan’s supposed influence and reach in Malacañang also seems to have been exaggerated by critics, according to its officials.

“It’s less than what our adversaries say. We are a legend in their minds,” Hontiveros said with a laugh.

Gutierrez said Akbayan is just one of several voices that the President listens to when making a decision.

“We can’t really directly do anything. That’s the sad truth of it. When we entered government, I personally had high hopes as to what we could achieve. But the reality is not like that. At the end of the day, you have to actually come to grips with opposing viewpoints within the ruling coalition,” he said.

One instance where Akbayan was unsuccessful was in getting the President to support its security of tenure bill that would curtail contractualization. Instead of supporting the measure, Mr. Aquino spoke against it, to the group’s disappointment.

There have been victories, though. One is its campaign against the burial of ousted dictator Ferdinand Marcos at Libingan ng mga Bayani. Akbayan opposed the move, and Etta Rosales went to the President to narrate her personal experience of torture during martial law.

That proved to be vital, Gutierrez said, because Mr. Aquino told Rosales that he thought about what she had said before making his decision.

But triumphs like these are few and far between, Gutierrez added.

“For every one moment like that, there are 20 moments where some other viewpoints prevail. That’s the way you work in a coalition,” he said.

And despite being part of the administration’s senatorial lineup, Hontiveros and Akbayan are not going to get public funds for the campaign and would have to do their own fundraising.

Hontiveros said she was used to running a “lean and mean” campaign, but was finding it hard to raise the P30 million to P35 million she would need.

Part of the campaign funds would come from the membership dues of close to 80,000 card-carrying Akbayan members nationwide.

According to Hontiveros, her campaign will rely on communities dominated by Akbayan members and on visiting other areas where the group has partner organizations.

Social media is another important arena that her team plans to tap, given that it is inexpensive and has a massive reach, especially among the youth. Social media issues also tend to spill over into the mainstream.

Hontiveros said she would continue her message of fighting for women and championing their causes, an advocacy that would also strengthen men, children and the families they nurture. This time around, she and her team are starting early on the task to raise awareness of her and her advocacies.

Hontiveros is running with politicians who have been entangled in many issues that Akbayan spoke against. Asked if she could campaign for them, she said the group had committed to support the entire administration coalition.

“We come from a tradition where we can work in a coalition where we agree on some things, and they are important enough to hold us together, but we continue to disagree in principle on other things,” she said.

In the case of the Liberal Party-led coalition, the glue that holds its disparate lineup is support for the President’s reform agenda, according to Hontiveros.

It is in the same spirit of finding common ground that Akbayan has a partnership with the administration, which Hontiveros doesn’t consider a liability at all.

The team-up was something that the group entered into willingly, after consulting its constituents, she said.

Akbayan chose to support Mr. Aquino because the group has had a positive legislative experience and common ground with him. He was also the candidate least likely to enter into an agreement of accommodation with Arroyo, she said.

The partnership is something that Akbayan continually evaluates, to check whether it is not straying from its objectives, she further said.

For Akbayan, engaging with the administration is a sign of maturity.

“I don’t think it’s a negative because it’s part of our practice of coalition politics,” Hontiveros said. “Part of being a party is we vie for power, but power to fulfill our platform for change.”

This kind of action is something that she hopes more people will accept as political parties in the country evolve, she said.

“I hope in the long run, part of the message that we show to the people is that this is what having a mature political party system involves, the capacity to form coalition governments and the capacity to walk away when the basis of unity is no more,” she said.