26 killed, more than 200 wounded in clashes in ex-Gadhafi bastion – medics 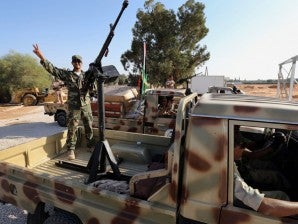 Libyan army forces gather at their headquarters in Tripoli last October 18, 2012 before their deploy to the city of Bani Walid, some 185 km south of the capital, which is witnessing clashes. AFP PHOTO/MAHMUD TURKIA

TRIPOLI – Clashes Saturday between pro-government forces and fighters in Bani Walid, once a bastion of Libya’s fallen leader Moammar Gadhafi, have killed 26 people and wounded more than 200, medics said.

Hospitals in the city of Misrata, where forces loyal to the new regime are being treated, were overwhelmed with casualties.

One medical official cited by the official news agency put the death toll at 22, with more than 200 wounded.

A medical official in Bani Walid, which has been under siege for more than two weeks, told AFP: “Four people were killed, including a three-year-old girl.”

The violence comes exactly one year after Gadhafi was captured and killed in his hometown Sirte, the last city to fall to NATO-backed rebels in the 2011 conflict that ousted his regime.