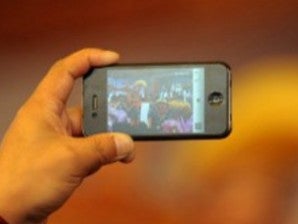 SAN FRANCISCO – In this tech-savvy city teeming with commuters and tourists, the cell phone has become a top target of robbers who use stealth, force and sometimes guns.

Nearly half of all robberies in San Francisco this year were cell phone-related, police said, and most occurred on bustling transit lines.

One thief recently snatched a smartphone while sitting right behind his unsuspecting victim and darted out the rear of a bus in mere seconds.

Another robber grabbed an iPhone from an oblivious bus rider — while she was still talking.

And, in nearby Oakland, City Council candidate Dan Kalb was robbed at gunpoint of his iPhone Wednesday after he attended a neighborhood anti-crime meeting.

“I thought he was going to shoot me,” recalled Kalb, who had dropped his phone during the stickup. “He kept saying, ‘Find the phone! Find the phone!'”

Police reported that more than 40 percent of all robberies now involve cell phones. And cell phone thefts in Los Angeles, which account for more than a quarter of all the city’s robberies, were up 27 percent from this time a year ago, police said.

“This is your modern-day purse snatching,” said longtime San Francisco Police Capt. Joe Garrity, who began noticing the trend here about two years ago. “A lot of younger folks seem to put their entire lives on these things that don’t come cheap.”

Thefts of cell phones— particularly the expensive do-it-all smartphones containing everything from photos and music to private e-mails and bank account statements— are costing consumers millions of dollars and sending law enforcement agencies and wireless carriers nationwide scrambling for solutions.

In San Francisco, police have gone undercover and launched a transit ad campaign, warning folks to “be smart with your smartphone.” Similar warnings went out in Oakland, where there have been nearly 1,300 cell phone robberies this year.

When Apple’s ballyhooed iPhone 5 went on sale last month, New York City police encouraged buyers to register their phone’s serial numbers with the department. That came just months after a 26-year-old chef at the Museum of Modern Art was killed for his iPhone while heading home to the Bronx.

In St. Louis, city leaders proposed an ambitious ordinance requiring anyone who resells cell phones to obtain a secondhand dealers license. Resellers also would need to record the phone’s identity number and collect detailed information including the seller’s names, addresses, a copy of their driver’s licenses — even their thumbprints.

“It will take a national solution to make this problem go away,” St. Louis Mayor Francis Slay said of the phone thefts.

Though some experts put annual cell phone losses in the billions of dollars, there was no precise figure on how many devices were stolen each year.

However, the problem has become so visible that it has caught the attention of lawmakers and regulators seeking to take the profit out of cell phone theft.

In April, U.S. Sen. Charles Schumer and New York City Police Commissioner Ray Kelly announced that the major U.S. cell phone carriers and the Federal Communications Commission have agreed to set up a national database to track reported stolen phones. It is scheduled to launch in late 2013.

Schumer also introduced a bill called the Mobile Device Theft Deterrence Act, which proposes a five-year prison sentence for tampering with the ID numbers of a stolen cell phone. The bill is supported by the Cellular Telecommunications Industry Association (CTIA), a Washington, D.C. advocacy group.

In addition, CTIA officials said carriers are expected to launch individual databases later this month to permanently disable a cell phone reported stolen. The initiative is similar to a successful decade-old strategy in Australia.

Previously, U.S. carriers have only been able to disable so-called SIM cards, which can be swapped in and out of phones. That’s led to a profitable black market for stolen phones.

“We want to dry up the aftermarket,” Guttman-McCabe said. “Hopefully, there will be no sense in stealing a phone and a once valuable piece of hardware will essentially turn into useless metal.”

Right now, the incentive is to steal and that’s creating huge losses, said Kevin Mahaffey, a co-founder of Lookout, a San Francisco-based mobile security firm which has advised carriers about the national database.

“Thieves know that carrying a smartphone is like carrying $500 in your hands,” said Mahaffey. His company estimates that stolen and lost cell phones could cost American consumers more than $30 billion this year.

In Chicago, two men were each charged with armed robbery last week after stealing an iPhone from a teen.

In Oakland, nearly three dozen people were recently arrested during a sweep for allegedly stealing smartphones. On Tuesday, police arrested a 15-year-old boy who allegedly swiped a woman’s iPhone near Oakland’s City Hall and sold it in downtown San Francisco for $200 to buy marijuana.

“It’s a quick crime of opportunity, a snatch and grab, either by foot or on bike,” Officer Johnna Watson, an Oakland police spokeswoman, said. “The thieves are gone in an instant.”